Logitech's mm50 speakers may be discontinued, but they're still good 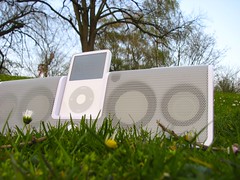 A few days ago my wife mused that she'd like something by her bedside to listen to podcasts and music on, so she doesn't have to go to sleep wearing earphones. Gadgety guy that I am, today I went out and found her just such a thing, the Logitech mm50 iPod speaker system. While it has been superseded by Logitech's newer and very similar Pure-Fi Anywhere system, the mm50 is still widely available (for now) in the $100 to $150 range, brand new.

I've had my eye on the mm50 since Adam Curry advertised it on his Daily Source Code podcast a couple of years ago. For our needs it's the right mix of reasonable size (it's about the length of a loaf of bread, and as deep as a thick slice), portability, ease of use, and, most of all, sound quality. The unit I bought was a discounted open-box floor demo from Best Buy, and while there I compared it to a variety of other options. It sounded superior to most of them, and better than pretty much anything in the sub-$200 category, including its newer Pure-Fi sibling.

It's not perfect. While it charges any iPod plugged into its dock connector, and includes adapters for several iPod models, the mm50 doesn't act as a true iPod dock that you can connect to your computer to sync up. (Earlier releases of the mm50 did offer that feature, and it's still noted in the manual, but newer revisions like ours don't have the necessary pass-through dock socket.) Volume control is two buttons, rather than a more sensible knob. There's no bass or treble or other equalization control—although the sound is so good those don't seem necessary, and not having them keeps down the button clutter. The included remote, while useful, doesn't offer as much iPod control as some competing models. The internal battery isn't easily replaceable.

I think the mm50 is a good value, especially if you can find it at a reduced price now that it's a discontinued model. My wife sure likes hers.