The Chilean mine rescue was no miracle. It was rather more impressive than that.

I'm no cynic. Yesterday, as each of 33 trapped miners emerged from the Fenix rescue capsule, out of the dusty ground in the mountains of Chile, then hugged his wife or girlfriend or child or brother or other relative, I cried. Sometimes I wept openly in front of the TV, or in the car as I listened to the radio. These were men who could easily have been dead for months, but who are still alive, and healthy, and now back with the rest of us.

But so many people, from miners and rescuers and their families, to politicians and media correspondents, called it a miracle, and that bothered me. This rescue was no miracle. It was a remarkable, difficult, challenging, and happy human achievement. I posted on Twitter and Facebook that calling the rescue a miracle belittles the amazing human work done by the rescuers, the teams of engineers and others who planned and executed it, and the miners themselves.

There was a lot of praying and thanking God from the miners, their relatives, the politicians, workers and others onsite at the San José Mine. Which is fine—they are entitled to believe what they want, and to draw comfort and inspiration however they can—but no god dug that amazing rescue shaft.

Sadly, now representatives of different churches are trying to claim that their particular prayers were the ones that helped save the miners. Yet, or course, none are vying for their version of God to take the blame for the initial disaster in the mine two and half months ago—or for the deaths of dozens of other miners in Chile this year for whom there were no miracles. (UPDATE: For further context, in China, there were over 2600 mine deaths last year, and more than 1250 so far this year.)

Miracle does have a secular meaning, but from the President of Chile on down, in this context people seemed to be using its most direct definition: "godly intervention." Yet a real miracle would be if the miners had just been magically teleported to the surface when the collapse began, or if it hadn't happened in the first place. But people had to dig the rescue shaft, and that is the wonderful achievement.

I looked out my front windows yesterday and realized that what the rescue did was pull each man on a thin strand through a drill hole 2000 feet deep, like bringing them up from the very heart of one of the North Shore mountains to the top, on a wire: 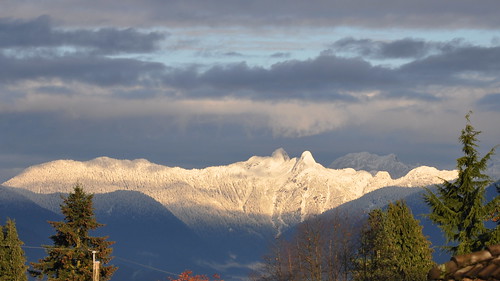 Here's a visualization to scale of the distance (via J-Walk), which you can also see along the right edge of this blog entry.

Doing that took skill, talent, knowledge, ingenuity, determination, science, and meticulous planning. It was tremendous good luck (and at least some credit in mine safety design—however flawed—plus training and discipline) that the miners all survived the initial collapse back in August, and the 17 days before anyone was able to contact them. But from then on, the rescue effort was pure hard work.

However inspiring it is to some that people around the world were thinking of and praying for the miners while they remained trapped in their tiny, hot, humid rock chamber for months on end, it was not the abstract thoughts and prayers that pulled them out. It was the thinking and planning, drawing and building, drilling and feeding, testing and re-testing—it was the doing that brought them to the surface yesterday.

Derek,
Once again you are right on the money (or to steal from one of my favorite movies, "dead on balls accurate!"
I would love, with your permission, to re-post to my rather slim blog and to send around via email to everyone I know. Well said, man!
Ron
(faithful podcast listener)

Sure thing, just link back!

I totally agree. I'd put the rescue of the Apollo 13 astronauts above this current example of human ingenuity, however.

perhaps one day we won't need for men to go down into the mines and risk their health and lives...

That, I think, will be a long time. Dad, I agree with the Apollo 13 rescue too. Getting them back safely took extraordinary ingenuity.

Hope springs eternal. And I remember watching Apollo 13 on TV--you're right, that was miraculous.

Yes indeed I agree with you on this. I'll admit I cried too when I watched a video on YouTube and saw a little boy watching the first guy ascend. Wow.

You're absolutely right, Derek. It bothers me to no end that some refuse to believe and accept what other people are capable of. Confidence, capability and cooperation made this possible. In my view, that's an impossible challenge for divine intervention to overcome. We need people who have less understanding of what was involved to acknowledge this was more than a miracle; it was a miracle only human beings could make possible.

Thanks for bringing this to our attention.

Roger Ebert has a smart take on this subject too.

Sorry to get all negative on you, but I have two points that (mostly) agree with you and your commenters, but I think need mentioning. As a bit of background, I once worked in a mine in Myra Falls (look it up) for 12 hours at a time, 4,200 feet underground. I also worked briefly at a mine in Sudbury, 6,900 feet down. People built those holes. THAT's a "miracle."

Of course, as Derek and others have pointed out, it's not a "miracle" as defined by the church, but rather an impressive result of human ingenuity.

The OTHER point is, billions of people watched/listened as 33 were saved. That's not a miracle - it's a travesty. I'm happy for the miners and their families, but THOUSANDS of people, many of them children, died while you were reading this post. And almost all of THEIR deaths could have been prevented without the need of "miracles." All they need is clean water and food, not 700m rescue shafts.