The Geekiest Photo of Derek Ever Taken 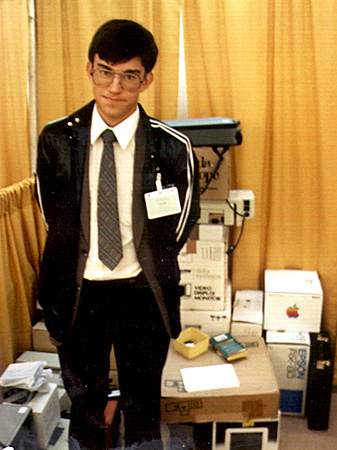 4 September 2003: This is, officially, the Geekiest Photo of Me Ever Taken, just dredged up from a cardboard box in the basement. It's from a booth I staffed for the Apple Alliance computer club at the Pacific Coast Computer Faire. It was 1985.

A few months ago, my friend Tara had a "worst photo" party, where you were supposed to bring the worst photo you could find of yourself (that wasn't supposed to be bad). I couldn't attend, but this one is what I would have brought.

UPDATE: In December 2003, my bandmate Adam had some fun with Photoshop and this image, and visualized what I might have looked like in a funkier alternate universe.

UPDATED UPDATE (March 2008): This picture is now part of the Flickr group Your Geekiest Photos, and this page is the #2 result for "most geeky photo" on Google. Yow.