I've put together 14 high-quality original podsafe instrumental tunes from my Penmachine Podcast into a CD album you can buy. It also includes a bonus data DVD with a bunch of cool stuff that isn't on this website. Find out more... 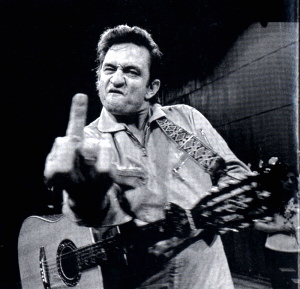 The day after Johnny Cash died, I wrote that the picture you see here was the greatest rock photo ever taken.

I didn't think much about it when I wrote that, because that's been my feeling since my surprise when I first saw it many years ago. But I did think about it later. What makes this photo so great, better than the thousands and thousands of others (some much better known) of musicians obscure and famous?

The picture's impact is obvious. Even though Cash was more of a country star, the attitude is all rock-n-roll. It's not a picture you'd show your mother, even if (maybe especially if) she's a Johnny Cash fan. Sure, there are thousands of photographs of celebrities giving the finger. Almost all of them are contrived, either stone-faced or with the tongue lolling out: "Look at me, ooh, I'm so dangerous," or "Oh, you paparazzi are so bothersome." They're dishonest, posed, and lack energy.

Not Johnny, even though the photo is contrived. The story (at least the most believable one) is that photographer Jim Marshall, snapping pictures of Cash before a concert at San Quentin Prison, asked Cash for a shot "for the warden," and got this result. So it was contrived, yet also spontaneous, which is the essence of rock music too.

You might think this is a picture of the young-punk Johnny Cash of the '50s, but it's from 15 years into his career, in 1969, when he was pushing 40. He'd already gone through addiction and recovery, divorce and remarriage, a string of #1 hits and a popular TV show. He was at the top of his career, when Americans bought more of his records than those of the Beatles or anyone else—5% of all records sold that year, apparently.

But it's more timeless than that. Even if you knew nothing about the photo's history, or even that it's Johnny Cash, it's still great. Other famous photos acquire mystique because their subjects are dead, or they represent a bygone era, or they're set up to make a statement. Very few rock photos transcend that, and this one of Johnny Cash does it best.

Here, there's no need for context. The guitar and swanky strap, the blur of motion, the casual collared shirt (both elegant and probably sweaty), the flip of dark hair, and that face. It could be 1955 or 2003; a makeshift prison stage, a giant concert arena, or a recording studio; an anonymous sidewalk busker or the biggest star in the world. Whoever that guy is, he rocks, and when he gives you the finger, he bloody well means it.

© 2003 Derek K. Miller. Some rights reserved. You may use content from this site non-commercially if you give me credit, under the terms of my Creative Commons license.