Is being an astronaut the most dangerous job? 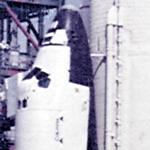 Last year, Forbes reported that people who work in logging, fishing, piloting small aircraft, steelworking, mining and drilling, roofing, construction, and truck driving have the most dangerous jobs in the United States, in that order. Loggers have the worst fatality rate, at 122.1 deaths per 100,000 workers. The most likely cause of death in any occupation (even policework) is a car or truck collision, with 23% of the total. Falls and homicide followed at significantly lower rates.

Depending on which statistic you use (i.e. whether sub-orbital flights count), either 426 or 433 people have flown into space in the American and Russian space programs. If you add those who died before they reached space, such as the 1986 crew of the Challenger shuttle, as well as the latest Columbia astronauts (who made it to space, but weren't in the stats I found), you get up to 450 or so, depending on how you count. As of the Columbia catastrophe, 24 astronauts have died in the American program, and 10 or more (possibly quite a bit more) in the Russian/Soviet ones (some Soviet deaths may still be kept secret).

So, at the very lowest end of the range, with 34 deaths out of 450 spacefarers, we have a 7.5% death rate. In terms of the "dangerous jobs" statistics above, that's more than 7,500 deaths per 100,000. So being an astronaut or cosmonaut is well over 60 times as dangerous as logging, and has nearly twice the fatality rate as climbing the world's highest mountains.

I may misunderstand the statistics and be making some improper comparisons (if so, please tell me), but from my quick calculations, it appears that the answer is "yes."