Ten years ago today, I arrived with my snare drum and bandmates in Melbourne, Australia for the first and only international tour by our indie original music act, The Flu. It was our big attempt to Make It. In late 1994, we'd independently released an album (on cassette!) called Light House, had set up what may have been the first self-run indie-band e-mail list, and had for the last year been living entirely off music income, mostly by driving all over the province playing crappy bars as The Neurotics, as well as busking on downtown streets.

In Melbourne, it was a grueling but galvanizing three weeks, spent playing show after show at the Melbourne Music Festival. We started opening for a fairly popular local act, then played a series of nearly-empty pubs before word got out that we were actually pretty good. Among other Canadians at the festival, we got to hang around with Valdy, who remains one of the coolest musicians I've ever met. 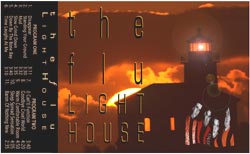 An appearance at the outdoor St. Kilda Beach festival (in 40° C heat) and a following-act show for Silverchair brought more people to subsequent gigs, so that by the end of our stay, a dedicated crew of Flu fans followed us two hours inland to Bendigo, where a couple of them gave Dirk, our bass player, a custom T-shirt with his picture on it.

Then, at the end of February, 1995, we flew back home to Canada, where nobody knew who we were, and spent several more weeks in snowy Terrace, in northern B.C., playing a house gig at a hotel so we could pay off the loan I'd taken out to get us to Australia in the first place. We didn't know that, before Christmas and before we'd even left for Down Under, we had already played our last show in Vancouver.

By April we had done another small tour through Alberta, but after more than a year living in each other's pockets, we were now regularly at each other's throats. Alistair quit first, and while we searched for a replacement guitarist, we only found temporary fill-ins for The Neurotics cover-band shows. My wife and I got married in August, and, predictably, I bailed out of the band by October. The cover band soldiered on, with various personnel changes, and turned into a profitable act for weddings and corporate parties, so I re-joined The Neurotics five years later, in late 2000. But The Flu just fizzled out.

My family has gained a long-term friend in Leesa, who still lives in Melbourne but who has visited us many times since, including a one-year stint working here in Vancouver. And we did make that album. If you want to take a listen, here's a sample mix of three of the songs: