Mama, you've got to move

The area known as the Mississippi Delta is not, as most of us might think, the actual oceanic delta at mouth of the Mississippi River. It is a huge inland flood plain between Memphis and Vicksburg, several hundred kilometres upriver from New Orleans—and the place where the blues originated.

In 1927, the Mississippi flooded from north of St. Louis, and threatened or broke levees for about 1000 km. In the Delta itself, the land was inundated, and thousands died. In frightening parallels to this week in New Orleans, throngs of poor black people were stranded without food, water, or shelter in hazardous flood zones, while richer whites escaped. Five years ago, a PBS documentary called Fatal Flood publicized the local, state, and federal negligence, incompetence, and corruption that contributed to the tragedy, reaching right up to then–Commerce Secretary and future U.S. President Herbert Hoover. 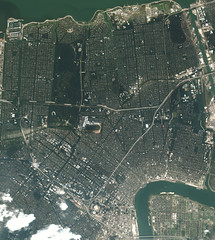 Shea Penland is a geologist at the University of New Orleans. Also five years ago, he said of his city:

It would cost a billion or two dollars to make the levee 30 feet high. A major flood with loss of life could cost $10 billion. What's wrong with this picture? If we know the worst-case scenario is billions and it would take a billion or two to prevent it, why don't we do it? I don't think anyone's thinking about it.

We're thinking about it now. And there are tens of thousands of mostly poor, mostly black people again stranded without food, water, or shelter in hazardous flood zones, while richer whites escaped. It will take less than 70 years before the negligence, incompetence, and corruption that exacerbated the problem come out. In the meantime, you can do something: donate money. 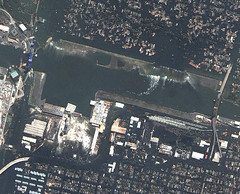 Here in Canada, I have heard some shameful schadenfreude about this disaster, with donations slower to come in than for the Asian tsunami last December. But I think that's changing as the TV news and the papers and the Web show us the extent of the catastrophe. Never mind softwood lumber, never mind Iraq. These people did nothing to deserve what has happened to them, and they need our help.

And here's how to prepare yourself and your family for any future disaster where you live.