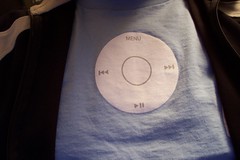 Here's a weird thing. Recently, my employer Navarik bought a bunch of new computers, including various PowerBooks and a brand-new iMac G5 for me (yay). Since we were spending quite a bit, our Apple dealer gave us some free goodies, including an old promotional T-shirt for the discontinued iPod mini.

Because I provide a lot of Mac support around the office, our IT people were kind enough to give me the shirt. I usually wear it under a cardigan or other open sweater, so all you can see of it is the undecorated iPod click wheel design on the front. The word "iPod" and the Apple logo do not appear. The effect, and what it says about the power of Apple's iPod brand, has been fascinating.

I have a lot of T-shirts, and I've never seen a reaction anything like this to any of them, or any other piece of clothing. Has a consumer electronics device—even the original Walkman—ever generated this kind of cultural buzz?