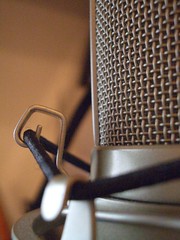 Last night we recorded the first episode of Lip Gloss and Laptops, the new health, beauty, and cosmetics podcast by my wife and her friend K.A.

UPDATE: Over on Dori and Tom's site, I was so absorbed in reading about Tom's return from the hospital that I completely missed Dori's links to the Wise-Women podcast tutorial. And Todd Cochrane's book on podcasting would certainly be a good read too, though I haven't checked it out personally yet.

The way the session worked was that the hosts spent the past week or so doing research and prep, then went over their notes while I set up the technical end, which consists of:

Once we had everything set up and levels checked, I left the room, shut several doors for sound isolation, and went upstairs to wrangle our two daughters and K.A.'s son, to try to keep the noise levels down. It took a couple of false starts before the hosts got comfortable, but eventually they laid down a single continuous 20-minute take that was quite good, and which we'll upload for subscription on March 1.

As engineer and cable rassler, I spent part of this morning mixing their vocals with music and promos from other podcasters, and tweaking levels, then sent it to the hosts for approval. Since I had received the M-Audio interface and MXL mic not an hour before we set up, I didn't quite know how they worked and made a few mistakes in my setup, so I had to use the Audacity sound editor to do some more in-depth sound editing, which shouldn't be necessary for future episodes now that I know better what I'm doing.

Although I have lots of experience recording music and my own solo voice, I haven't previously done anything like this podcast—which has two others hosting it, and which we are trying to give better-than-average sound quality. So in prepping for the session, I used some handy online resources to help figure out what I needed to know:

The last session implies that I should probably hook up a dbx 266XL compressor/gate to the chain before our next session. Why that particular model? Because I already own it and it's stored in a portable rack case in the same recording room—we use it in my band for the bass drum on my kit, and otherwise it's just sitting on a shelf in the meantime.

In the long run, I'll probably want to get something like this to make the editing and mixing process smoother.