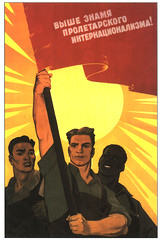 Jason Kottke points to this huge Flickr photoset of nearly 1500 advertising and propaganda posters from the USSR. I had a brief conversation with Darren at work about why these images don't repulse us the way Nazi propaganda does.

There have, of course, been many very large books written about the subject, including Martin Amis's Koba the Dread, in which he asks why we can laugh at Stalinism but not Nazism—why, indeed, do so many wear faux–Socialist Realism T-shirts as symbols of ironic humour, while wearing a swastika in any form could easily get you beaten up or at least ostracized from any kind of polite company?

Not an easy question to answer. Reviewing Amis's book, Charles Taylor writes that perhaps "Stalin's ends—collectivization, industrialization, even the attainment of absolute power—were at least comprehensible (which is not to say right, desirable or even thought-out) although the means he used to achieve them were barbaric. Hitler employed rational, industrialized means (one could even call them 'neat' and therein lies part of the offense) toward an irrational end: the physical elimination of every Jew."

Maybe, maybe. It remains true that many of us can browse those Soviet posters without feeling ill, in fact even admiring them.

Darren also pointed out that in China, Mao's Cultural Revolution sent many artists, like those who would have made such posters, out into rural forced labour camps, to die by the millions too. And yet one description reads, "An almost mint-condition vintage propoganda poster (present from Jamie) from Mao's cultural revolution of the 1970s....love it!"