Is that Ubuntu in my pocket? 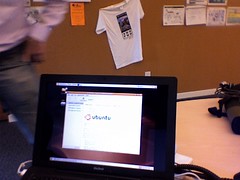 So today I downloaded and installed the 15-day trial of Parallels, and the full CD install image of Ubuntu, and went to town on my MacBook. The initial boot up into Ubuntu from CD was painless—less than 15 minutes from when I had finished the downloads. There were a few hiccups getting everything working, but now it does, and it wasn't really significantly harder than getting Mac OS X or Windows XP to install on new hardware: 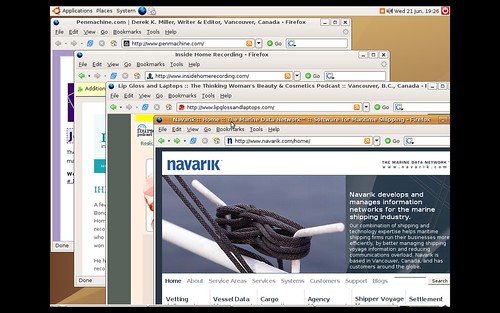 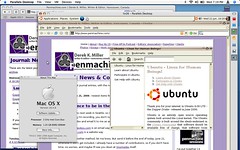 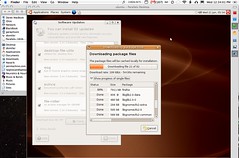 The verdict? Not bad at all. Since I spend much of my day in Gmail, Flickr, Blogger, WordPress, and other web-based applications, and since many of the tools I use on my Mac, like Firefox and Audacity (how the hell do I install that, anyway, with all the dependencies?) are available for Linux, what would I miss if I switched over?

If I could get GarageBand or Logic Express and Photoshop Elements, plus a good UI-based text editor like BBEdit (any suggestions?—and no, Emacs and vi are not what I'm looking for), I'd have most of what I need. I actually prefer the look and feel of Ubuntu to Windows XP or what I've seen of Windows Vista so far. Ubuntu has brought desktop Linux a long way.

Still, it doesn't quite have the fit and finish of Mac OS X. I could certainly get much of my work done in Ubuntu (I'm typing this in it now, in fact), but it's missing some of the very cool applications from Apple and others, and I don't think I'd enjoy living with it quite as much.

But I'm impressed with how far Ubuntu has come from the complete command line–makefile–geekitude of desktop Linux just a few years ago. In a few years more, this could get really interesting.