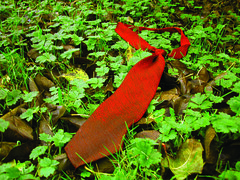 Today is my 20-year high school reunion. I graduated from a hoity private school for boys, St. George's, on Vancouver's West Side (my parents paid for it with my university money—university required me to get summer jobs and such). An email from our valedictorian and Head Boy, now a lawyer, asked each of us 1986 grads for a few paragraphs summarizing what we've been up to, as well as photos. Here's my contribution:

Immediately after graduation, I spent the rest of the summer at Expo 86, then avoided wearing neckties for much of the next decade and a half by getting deeply geeky with pre-Internet online Bulletin Board Systems (BBSs), going to UBC and getting a degree in marine biology and a diploma in applied creative non-fiction writing (no, the last one's not clear to me either), becoming involved in student politics (including two years as elected student rep on the UBC Board of Governors), helping to start two different student newspapers (one of which turns 20 next year), editing the student handbook, working for the UBC Alma Mater Society, developing Type 1 diabetes, and learning to play the drums. In 1994 I finally left campus to be a full-time musician in The Neurotics (theneurotics.com) for a couple of years, play pubs and bars throughout B.C., tour to Australia, and then get married to my lovely wife and quit the band—temporarily, it turns out—to settle down.

In 1995 I had a brief stint in advertising at Gardens West magazine before sliding back into computers and software, working at Windows application developer Maximizer Software for almost five years, first as an admin assistant before figuring out how to build web pages and then run the company website. The dot-com bust lost me that job, and by this time our daughters (born in 1998 and 2000) had arrived, so my wife continued working full-time as a public school math teacher while I stayed home with the kids and worked very part-time as a freelance technical writer and editor, as well as a drummer (same band, after a five year hiatus) again, and someone with one of these new Internet things called a "blog" at penmachine.com. In 2003 I started at Navarik (navarik.com), a company begun by some of my UBC colleagues, where we build web-based software for ocean shipping companies, and where I'm now Communications Manager.

More recently, I've been getting involved in the global web development community, and have also become a podcaster at podcast.penmachine.com and insidehomerecording.com. (I engineer my wife's show at lipglossandlaptops.com too.) I returned to composing and recording my own music in 2004, with several dozen of my tunes played by hundreds of podcasters around the world as theme and background music. I released an album, Penmachine Sessions (buy.penmachine.com), in 2005, on which I play pretty much all the instruments, some of them even tolerably well. (I didn't take band while I was at St. George's, by the way.) 2006 marks the first year both my daughters are in school full time, and the first since 1998 that I've worked full time, as well as my wife's and my 11th anniversary. We live with our daughters in the other half of the same duplex in Burnaby that my parents own, in which I grew up, and from which I commuted to high school in the '80s.

There are a few photos of me here:

Now I can forgo that thousand-page autobiography, don't you think?