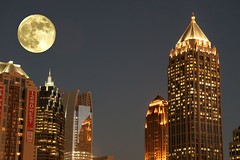 My dad has been a keen amateur astronomer since his childhood in Germany, so while I'm not, I grew up well aware of the light pollution that prevents most modern people from seeing stars, sometimes hardly ever over the course of our lives. When I was a student member of the UBC Board of Governors in the early '90s, I was frustrated that a new campus "safety lighting" plan seemed to ignore that lights shining largely upwards are not only wasteful (they don't help people see better), but also further disrupt the nighttime view of the sky—this on a campus that includes an astronomical observatory, and whose university president at the time used to be NASA's head moon-rock scientist.

So I was pleased to read (via Kottke) that Reykjavik turned out its lights so people could see the sky at night. It wasn't an entirely clear evening, but it would be amazing—as happened during the large-scale blackouts in eastern North American cities fairly recently—for urban dwellers to see the myriad stars and blackness up there. Usually you can only do that by traveling far from a city. (The best sky I've ever seen? Two thousand metres above sea level at Crater Lake in Oregon.)

Coincidentally, the most recent Ideas podcast (MP3 file) from CBC Radio, called "While You Were Out," talks about sleep, and how in the past couple of hundred years we have completely disrupted the natural pattern of human sleep, which seems to be designed to run as two separate nighttime sleep periods, separated by an hour or two of pleasant wakefulness, historically known as "The Watch." (Oddly, that sleep pattern is only sparsely documented, because sleep was so poorly studied for so long.)

A primary culprit for our new sleep patterns is artificial light, the same light that pollutes our view of the stars. I'd like to try natural sleep sometime, but I expect it will be some years before I can take the time to do it.