A podcaster's impression of live radio 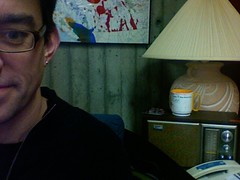 For a podcaster and audio geek like me, being on radio—especially live radio, as I was today—is endlessly fascinating. Even more so this time than when I've been on the air previously, since I wasn't podcasting back then and wasn't as focused on the equipment and techniques of audio production.

When we bring a guest into our home studio, for instance, they show up at our house and come to the basement. Today, as a guest, I approached the massive 1970s concrete slab of the Vancouver CBC Building and stepped into an antechamber where I talked to the security guard, passed through a locked portal, and received a numbered, red visitor badge sticker before I could walk down a long hall and find my way to Studio 31 via the elevator.

Canadian public radio staff dress just as casually as we web nerds do, but there were surprises too. The antiquated wood-panel Sony radio in the waiting area, for instance, which was tuned to CBC Radio One, AM 690—but in irony got absolutely atrocious reception a mere few metres from the room where the sound was being created.

Live radio, also unlike a podcast, is a remarkably efficient assembly line. Craig Lederhouse, who called me this morning to ask me to join "On the Coast," lurked outside the studio door, and then, less than a minute before I went on air, ushered me in, sat me down across from host Priya Ramu, and set up the microphone. I grabbed the headphones myself, since they were optional but I'm used to wearing them as I speak into a mic.

Another surprise was that the microphones themselves were nothing special. You might expect that the venerable CBC would be decked out with multi-hundred-dollar Electro-Voice RE-20s or Heil PR-40s or Shure SM7Bs. But no, mounted to desk arms were several Shure SM58s (or something very similar) with windscreens in simple shock mounts. Not even a pop filter.

For non-audio types, an SM58 is that stereotypical "ball-head" microphone you see on every hotel meeting room podium and pub stage, available at your local music store for a little over $100. I have two myself. The similar Beta 58 runs a couple of hundred bucks. But for AM radio, the sound is solid, and the mics are nearly indestructible and cheap to replace if they do break. Another part of the assembly line.

I was in and out of the studio in ten minutes. Priya and I exchanged perhaps five words when we weren't on-air, but had a pleasant and casual conversation when the light was on. I think I explained my compulsive blogging on every topic reasonably well, but of course as in any live venue, there were things I wanted to say that I never got around to—such as how much I appreciate the support of my employers during all this.

Finally, in total contrast to all the rules of radio, Priya Ramu looks exactly as I expected her to. I didn't think radio hosts were allowed to do that.

We did capture the audio, so I'll have something posted for those of you who missed it.