Don't cheese off the geeks 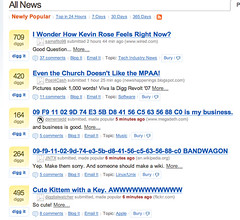 Okay, this is immensely nerdy, but it's also important, in a nerdy way. So bear with me.

Here's the basic summary: new-generation high-definition video discs like HD-DVD and Blu-ray include heavy-duty encryption to try to prevent people from copying them. Unfortunately, since people actually need to watch the movies they buy, and since eyeballs cannot be encrypted, the fact is that no matter how heavy-duty the encryption, the only way to keep it that way is to keep the digital decryption key (a string of numbers) somewhere on or in the playback device—but to keep it a secret.

In other words, to play by the movie industry's rules, your HD-DVD or Blu-ray player or hi-def disc-compatible computer needs to hide something from you, its owner. Needless to say, that didn't work for too long. Some geeks extracted a decryption key and posted it online.

The movie industry has used the execrable Digital Millennium Copyright Act to try to get Google to stop indexing the number—a string of hexadecimal digits—and has sent takedown letters to numerous bloggers and other websites that had posted it. One of them was the social news site and geek darling Digg.

Digg rolled, and started deleting posts and banning users, possibly permanently wounding its credibility among its users. And prompting a flood of stories about nothing but the decryption key, which now has its own MySpace profile, as well as T-shirts and songs and stuff.

UPDATE: Digg has given up and decided the blocking/banning was a bad idea.