Have you heard of this band, The Police?

So my wife and a couple of friends and I went to see this British three-piece combo play here in town last night: 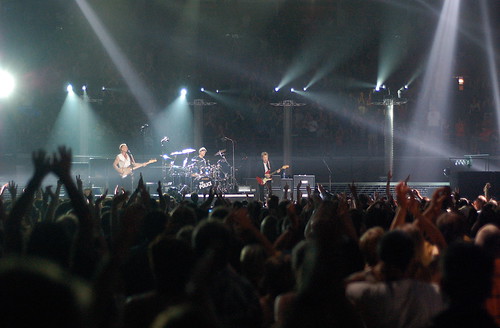 Despite being grey-haired old guys, they had some catchy tunes and rocked out rather well. I hear they've had a few popular albums over the years too, which might be worth checking out.

While we were there, I took some more photos...

Hope all is well, thinking of you and throwing good vibes daily (in my agnosticy way :-) )

I'll be seeing them in Tampa in July :) So did you sneak in the camera, or did they not care--is that by venue, or by concert series?

If you think they're worth checking out, I guess I should.

Thanks for the recommendation.

Hey, you were just below me. Fabulous show - I last saw them in 1983, so it's been a long time in coming.
Was I the only one that thought Andy's timing on 'Spirits In the Material World' was off, or was that just their idea of a new twist on an old song.

Copeland was amazing, though. Man, that guy can play the drums. Incredible energy for all of them, even if they're geezers...

Oh, something else to keep in mind, as well. Apparently they've sold 1.7 million tickets to this tour, at probably $100 per, on average (the floor and lower bowl seats in Vancouver were $225)

So, conservatively, with the merchandise factored in, we're looking at about a gross of $200 million.

Worth every freaking penny, so far as I am concerned. Great show...

The whole band was off during "Spirits" (they even restarted it), and there were a whole bunch of other muffed bits during the show, most of which only a musician would notice. (My Inside Home Recording co-host Paul and I pointed out a whole bunch of them afterwards, and his wife said she didn't notice any.)

And that's just the way I wanted it. They were playing real music, messing around with it, pushing and pulling each other in different directions, yet not going all Bob Dylan and making their songs unrecognizable either. Sometimes it didn't work all that well (the slower arrangement of "Don't Stand So Close to Me" wasn't as good as the original), but most of the time it was spectacularly good, mistakes and all.

As for the camera stuff, there's a bit of a discussion over at the IHR listener forums, plus there is this advice which I did not follow at all.

i'm so excited to see your blog. unfortunately, despite being a huge fan back in 83, i missed the tacoma concert. i am going wednesday to the first seattle showing. totally stoked!