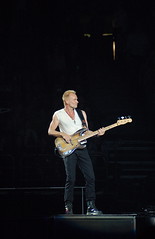 I'm obviously still suffering radiation side effects fairly strongly. After the Police concert a couple of nights ago, I spent the whole day yesterday in bed, with a slight fever, unable to do much of anything at all. I'm feeling a bit better this morning.

It was worth it, because I had a great time at the show. I even liked that the band messed up quite a bit—missing cues, restarting songs, not quite reading each other's body language right. Most people in the audience surely didn't notice, but as a musician I did (and so did Stewart Copeland—here's his blog post about it), and that made the show more honest and fun and intimate for me.

In a time of prefab Disney-Nickelodeon pop stars singing through pitch-correcting software, with rigorously choreographed concerts, a stage full of backup dancers, songs sequenced and processed to death, and exactly the same set list and timing night after night, it was refreshing to see three guys play an actual rock show with their own instruments. On several occasions, Sting bypassed a chorus and moved into a second verse, and the other two had to switch gears quickly to catch up. And while he was in strong voice, I also noticed a couple of times when he hit a particularly high note and looked surprised at himself that he managed it.

There were a few subtle nods to modernity: the backing track for "Walking in Your Footsteps" was a synthesizer sequence, and some of Copeland's and Andy Summers's background vocals were artifically harmonized. But again, only real musical tech-heads would notice that it sounded like several people were singing backgrounds when only one was. And for most songs, what you heard was what they played, mistakes and all.

I also liked that they roamed all over their catalogue of songs, from the big hits ("Every Breath You Take," "Roxanne," "Every Little Thing She Does Is Magic") to somewhat obscure album tracks ("Reggatta de Blanc," "The Bed's Too Big Without You"). Often the less-famous songs turned out better, I think. They played the first track on their first album, "Next To You" (with genuine fire, I might add, as their ending encore), and the last track from their final disc, "Murder By Numbers" (which turned out very topical).

Even if the band didn't think so, it was just the kind of concert I wanted to see. I hope they don't get too perfect for the rest of you who will see them throughout the tour.

there were a few other subtle nods to modernity. The stacks of speakers were off the ground, the jumbo screens were razor sharp and bright, and all three were wireless so they could go as they please. Gone are the days of fuzzy jumbotrons, wires everywhere, etc, etc. But it looked like that bass Sting was playing was purchased quite some time ago. Like before I was born...

I wish Copeland had written up his thoughts about the Monday night show, for comparison. It seemed to go far more smoothly - no obvious stops and starts, though at one point I did notice him come in too dramatically on the drums and then back off, probably expecting a chorus too soon. And there was one awkward guitar harmony somewhere that made my ear twitch, but again, it was quickly resolved. But since they're professionals, they just pick up and keep going...

What I liked was that the Wednesday night show was just like every show the Neurotics ever played -- we call it "heads-up hockey." If the Police can be like that, I feel more akin to them as musicians.