This is "Penmachine.com: December 2001," a page that archives an entire month's entries from my online journal. The latest material for that month is at the top. For my newest entries, visit the home page.

As a working musician and a parent of two preschoolers, I haven't been to a New Year's Eve party in some time. Even as 2000 arrived a couple of years ago, the family and I were at home with a friend, watching our neighbours' fireworks and regretting that we couldn't watch the usual Seattle Space Needle fireworks on TV that year because of a terrorist threat (which seemed a tad silly at the time, sad as that is to say now).

Twelve years before that, it was at a 1987-88 New Year's house party in Lions Bay, just north of Vancouver, when I discovered that I could play the drums. At a beat-up drum kit in the basement, I tried to play the distinctive intro to U2's "Sunday Bloody Sunday" -- and I could do it. I'd never sat down at a drum kit before. Despite four years of classical guitar training during elementary school, I hadn't been very good at that, but drums seemed to be something worth pursuing.

My roommate and I soon made a deal that he would buy a guitar and I would buy a drum kit. I think we each spent about $80. Tonight, he and I join our two current bandmates (who've been musicians far longer than us) to play a New Year's Eve show at the Arbutus Club in Vancouver. I didn't think music would become a career, but I was certainly right about the drums.

If my first song had been U2's "New Year's Day," it would have been a perfect sort of movie moment, but alas, it was not to be.

I still own and wear every pair of Doc Martens shoes I've ever had -- my first pair, from 1994, remains in good shape. But this week I bought something new, which may rival Docs for comfort and longevity: a pair of Blundstone 510 boots from Australia (Tasmania, even).

With my wide feet, finding shoes so comfortable before they're even broken in is quite a revelation. We'll see how the "Blunnys" survive the rest of the Canadian winter.

A recent article in Science reveals a previously unknown type of giant squid, spotted at vast depths at various locations around the world.

These are not small creatures (6 metres long if you include their arms), are quite different from the better known (but still rarely seen) giant squid Archeteuthis, and yet are completely new to us.

Even on our own planet, we have a lot left to learn.

There was something new in Victoria since our last visit: brand new double decker buses that aren't tourist attractions, but actually part of the regular transit system. And they're left-hand drive too -- not leftovers from London, as the tour buses are.

Didn't get a chance to ride one, though.

No afternoon tea, but civilized nonetheless

A stay in Victoria makes a pleasant Christmas present. Even on a chilly December day, the view across Juan de Fuca Strait from the hotel is spectacular.

Whether you celebrate Christmas or not, I hope yours is a good one. Be warm and safe. 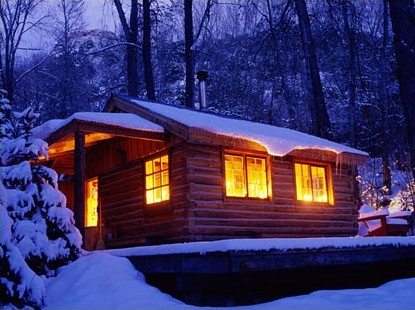 In "Latest hot toy for tots: PCs", Mary Anne Ostrom at SiliconValley.com writes that "Valley parents are buying kids as young as 2 their own computers."

Well, it ain't just the Valley, kids. Last week I acquired a Power Mac 7100 (vintage 1994) to set up next to the Windows PC in our den. I did it because our two daughters, ages four and two, were beginning to argue about who got to use the single machine. My youngest likes to play JumpStart Baby, while her sister prefers Millie and Bailey Kindergarten or NickJr.com.

I'm now glad I moved my computer downstairs a couple of years ago.

I love catalogs (or "catalogues," if you insist on the Canadian-British-Australian spelling). Now Google has a whole bunch of them available online -- actual colour scans of the real paper pages. But you can search them, which is even better than in the original printed versions.

So if you'd like to check out the Sharper Image catalog, for instance, but don't have one handy, Google is the place. No wonder Web usability expert Jakob Nielsen thinks it's the most useful site on the Internet.

Incidentally, Catalog City has been doing something similar for a long time.

Stardom is an odd thing. Back in the early 1980s, if forced to choose, most people would probably have guessed that Cyndi Lauper would outlast Madonna. Similarly, which celtic-guitar rock band would still be around in twenty years: U2 or Big Country? (For instance, before I knew her, my wife, like many teenagers, was part of Big Country's fan club in high school, but not U2's.)

Today I learned that a maid at his hotel in Hawaii found Big Country singer Stuart Adamson hanged in his room, after he had been missing for some time. I hadn't thought about his band in a long time.

U2 continues to appear at every benefit concert you can think of -- and still inspires high-school-like adulation. Still famous two decades on, the band has its detractors too.

Who, on the other hand, would bother criticizing Big Country today?

Since late November, my band, The Neurotics, has played six corporate Christmas parties around Vancouver, in locations ranging from the Jericho Tennis Club, to the main ballrooms of the Hotel Vancouver and Pan Pacific Hotel, to the lounge of the Fairmont Airport Hotel. We've done many more such events in the past year. In the process, we have discovered there are two types of audiences:

It goes to eleven

Until just now, I thought that I'd been on the Internet for a little over ten years, since sometime in 1991. However, now that Google has an archive of twenty years of Usenet postings, I've discovered that I posted messages as long ago as December 1990 -- which makes it more than eleven years I've had Internet access. (I was connecting via modem to bulletin board systems for more than eight years before that, since 1983.)

Why I chose to make my first post about the price of the Kate Bush box set (and let through a nasty typo in the process), I don't know.

Beware: heavy geek mode is on.

I recently discovered that, strictly speaking, my computer should be said to have 416 mebibytes (MiB) of memory, not 416 megabytes (MB). At least according to the SI International System of Units it should. I'm not holding my breath that computer manufacturers will start quoting mebibytes, though.

Someone had to say it

Here, at last, is "Bob's Quick Guide to the Apostrophe, You Idiots."

It may not be polite, but it makes the point.

The cost of computers

People use computers to improve their productivity, to do tasks they couldn't otherwise, to have fun -- many things. But we often find them infuriating. Jakob Nielsen, perhaps the Web's foremost usability expert, puts it well in one of his recent columns:

I recently wasted half an hour trying to print a report that had many screenshots. Several of the images printed only as "X." Why? Was it a problem with Windows 98? Or with Word 2000? Or was it that the vendor had yet to update the printer driver? Maybe the printer simply had too little memory. The point is: I couldn't figure it out, and I have a Ph.D. and 28 years' experience using computers...

Even worse is the resulting feeling of powerlessness that dominates most people's attitudes toward modern technology. Things happen to you, and you don't know why. You don't understand how your own tools work because of their random and unpredictable behavior.

Crashes in Microsoft Windows alone are estimated to cost people worldwide $170 billion each year -- and other non-crashing bugs may cost trillions. The problem is true of Windows and Macintosh computers, of Web sites, even of automated teller machines sometimes. And it's a shame.

I have taken my oldest daughter (she turns four early next year) to see two movies: Shrek this last summer and Monsters Inc. earlier tonight. (My wife took her to her first-ever film, Rugrats in Paris, some time ago, and to see Monsters Inc. when it first opened.)

Both movies feature major characters who are almost the exact same shade of green.

Any suggestions for what green-character movie we might be able to see next?

A few days ago, I linked to Dean Allen's wonderful little treatise on making oatmeal.

Having briefly considered and then forgotten about trying his recipe, it occurs to me now that -- given the leisurely pace and casual precision of his oatmeal-making method -- Dean cannot possibly have young children.

You're gonna drive me to drinkin'

The history of the song "Hot Rod Lincoln" (most famously performed by Commander Cody and His Lost Planet Airmen in the early 1970s) is far more interesting than you might have suspected.

Two articles I wrote for D-Link Canada's LINK magazine have just been published in the winter issue. Both are available only as Adobe Acrobat PDF files:

You can also download a (7.5 MB) PDF of the whole magazine.

I should thank Andrew Flostrand, Steve Hillman, Richard Campbell, and Don Mayer for the interviews that formed the basis of the article. Oh, and Adam Engst too, though his bit didn't end up in the final article for lack of space.

One year ago this week, I was in New York City, playing Beatles tunes in the exclusive party room of a very exclusive hotel, a short walk from where John Lennon was shot, and even closer to his memorial in Central Park. I didn't imagine then that, one year later, a vast hole would smolder downtown, and another Beatle would be dead.

George Harrison wrote some stupendous songs, and played some great guitar. He made the demo recording of "Something" on his twenty-sixth birthday -- he was that young even then, at the twilight of the Beatles' career. His solo in the Abbey Road version (with those great "meeew-eew-eew-aoow" slide-guitar figures near the end) is so integral to the song that you don't even think of it as a solo.

Yesterday my band played another show in our Beatle wigs and fake English accents, at the Hotel Vancouver. Among the many Beatles songs in our repertoire, we played "Here Comes The Sun." And then we said "Thanks, George."

Once a year, several thousand computer geeks get together in Sweden at Dreamhack, a sort of massive LAN party.

Here (in a very large image) is one scary consequence. (A friend of mine calculated it contains 1,111,968 mg of caffeine.)