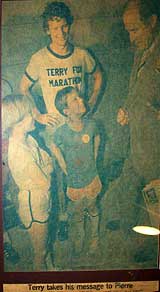 Okay, try to imagine the most Canadian photo you (or someone you know) have been in.

Being sworn in as a new citizen on Canada Day? Towing a maple leaf flag behind a dog team to deliver insulin to a group of moose hunters trapped in an igloo during a snowstorm? Paddling the Rideau Canal in a canoe while munching back bacon and drinking maple syrup? Arguing before a royal commission on health care with a view of Saskatchewan wheat fields in the background?

Sorry. Our friend KerryKLove has you all beat. I saw it, framed, on the wall of her father's home office at a party yesterday, and I stood staring at it for a few minutes before I had to sneak back in with my camera to get a copy.

It's a newspaper clipping, 25 years old, yellowed and faded:

The reason KerryKLove and her brother are in the picture is that their dad was the PR guy [not the camper driver, as I'd previously written - D.] for Fox during his run, and they were on the road with him for a good chunk of that summer. The encounter between the runner and the prime minister, which took place in Ottawa, was apparently awkward, because Fox had not yet garnered much publicity, and parliamentary staff had not properly briefed Trudeau, who didn't know about the run (rather Canadian in itself, I'd say). It would be their only meeting.

If you or someone you know is in a photo that's more Canadian, I'd like to hear about it here or at Flickr.