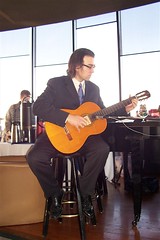 When I began classical guitar lessons in 1978 (sort of my idea, but not entirely), my dad said to me that, hey, you never know, you might need the skill to eat someday. I studied the instrument unenthusiastically with a kind but stern instructor at Aeolian Music Studios in our neighbourhood for four years, then quit when I started at a new high school across town—or really, I quit when I had a good excuse to. I'd taken my Grade Four Royal Conservatory of Music exam, done decently well because of a generous examiner, and then it was over.

I forgot everything. I'd never been all that good at reading music, and the skill leaked from my mind. I knew no real theory, so that was gone too. My guitar sat in my closet, and every once in a while there would be a loud TWANG! as a string broke inside the case. While over a third of the students in my school were in band, I didn't pick up a guitar or any other instrument seriously for more than five years. When I did again, it was trying the bass in 1987 when my roommate Sebastien borrowed one. At the end of that year, I tried the drums and found, to my astonishment, that I could play decently well without every having sat behind a kit before.

In 1988, my roommate and I set each other a challenge: on the same day, each of us would buy an instrument (he a guitar, me a drum kit) as cheaply as we could, and we would learn to play them. He found a crappy, silver-grey, plywood, eighties-style heavy-metal electric guitar, brand new in cardboard box at a pawn shop; I discovered what was probably a Sears brand blue sparkle drum kit, used, with god-awful cymbals. One of us spent $80, the other $75, and I don't remember who was who.

We learned, and within a year we'd played our first show, at the Science Undergrad Last Class Bash at UBC in the spring of 1989. By then Sebastien had graduated to a Squier double-humbucking Stratocaster, to which he stuck a Batman logo, and it became the Bat Strat, plugged into a solid-state Peavey amp. I still had the blue sparkle drum kit, but I'd added a better Pearl snare drum and some proper, but still cheap Sabian cymbals. As a band (with our other two roommates Andrew a.k.a. Elvis Flostrand on bass and Alistair on guitar, plus my classmate Ken, who is a now a university professor, also on guitar), we sort of sucked. But people were drunk, and we put on a funny show and had a good time.

We kept playing, from New Year's 1989-90 in a rough bar in Pemberton to a house gig at a scuzzy nightclub on East Broadway in Vancouver. I bought better drums, then bandmates and band names and one-off shows and house gigs came and went, and while I never learned theory or to read music again, I kept getting better and came to learn by ear, which works particularly well for the drums. I noodled on my guitar, which I was by then keeping strung, when I had the chance. By 1994, at the end of my university career, I was playing in The Flu and The Neurotics with Sebastien and Alistair and Dirk and we decided to go full-time. My dad's prediction came true, and though I only rarely played guitar, we spent some of our time busking in downtown Vancouver for money to eat. (Once we received a $100 U.S. bill in our guitar case, and never determined if that had been a mistake from the donor.)

I spent nearly two years as a full-time musician, traveling to Australia and Alberta, Powell River and Vanderhoof, Victoria and Prince George. The playing was fun; most of the rest (driving winter highways at night, fighting with bandmates, being poor, smelling like stale smoke and beer after every show without even smoking or drinking) wasn't.

I quit again, this time shortly after getting married, and spent the next five years hardly playing the drums or guitar or anything else again. I did the occasional fill-in with my former bandmates, creaking like the Tin Man after a rain and hurting my hands, since my callouses had faded. But by the end of 2000 I was back in the game, part-time, for a one-off show in New York City, and then, by the spring of 2001, a full member of The Neurotics again, with Sebastien still my guitar player. I've been at it ever since (part time, with day jobs), for five years now, almost 17 since my first gig.

My technique is not that great, on drums or bass or guitar, and especially on keyboards. I know what I'm doing, but only in the most haphazard and unschooled of ways. But aside from my performing live, I've found that since I started podcasting my compositions, people all over the world enjoy them, and some have asked me to write and record custom material. I'm no prodigy, never was, but it turns out I'm decently good at it.

Tomorrow, though, I'll play guitar for an audience for the first time since 1994, and classical guitar for the first time since 1982. Earlier today my daughters' piano teacher Lorraine asked me to play something for her year-end Christmas Recital, at the Cloud 9 revolving restaurant downtown. Without a second thought, I said sure, and agreed to a version of "We Three Kings," like the one I recorded last week. I may add a few more entertaining touches as well.

I thought I might be nervous, but I'm not. I've played so many shows in front of so many audiences over the years that I know, mistakes or not, that it will be fine, that I'll have a good time—and that I've played with less preparation, to truly hostile crowds, and come out the other side unscathed. It's a good feeling. I won't be playing for my lunch, but I'll be playing for my family—my wife, my daughters, their teacher, my parents, my in-laws, and the other students and their families. The thought makes me smile. After starting and quitting and starting again and quitting again and starting again and keeping at it, I guess I really am a musician now, because the idea of playing for an audience, and making them happy, makes me happy.