Derek to spyware authors: you suck 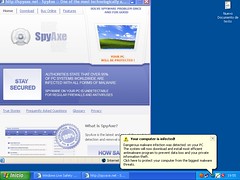 Having been a Macintosh (and before that, Apple II) user since the 1970s, I hadn't realized quite how bad the malware problem has become on Microsoft Windows computers. Then, a couple of days ago, my aunt and uncle in West Vancouver called me to help them with their infected PC.

I had some experience purging spyware and adware from the old Windows 98 computer we used to have, and I worked for a Windows software developer for almost five years, so I know the basics of what's going on. Before I went to their house, I checked out the various recommendations of knowledgeable people. But what confronted me was nasty.

Specifically, in addition to several other nefarious programs, their computer was infested by Spyaxe, which repeatedly popped up windows and alerts, changed the desktop background, and otherwise disrupted the user experience intolerably. Despite throwing every tool I could find at it, including specific tools to try to remove it, Spyaxe would not go away.

So we resorted to the heavy artillery: a complete hard-drive reformat and Windows restore, after backing up critical email and documents. I was at their house for about five hours, and in the end, we had things relatively back to normal. My aunt had to re-create some of her bookmarks and find her email password, and a few other things are a bit odd, but they're up and running. I had time to set up a separate user account for my uncle, and to switch their default browser to Firefox. We installed Norton 2006 and the well-reviewed Microsoft Antispyware beta.

But when people say Windows computers are cheaper than Macs, they sure aren't taking into account all that wasted time. It was almost as unpleasant an experience as trying to get my five-year-old to bed these days.