Did the 1964 Alaska earthquake and tsunami cause massive surf in Sydney, Australia? 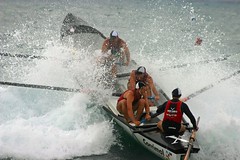 Neville Crane in Australia came across my tsunami articles recently, and posed this question:

In researching the Anchorage earthquake and tsunami of Good Friday 1964, I happily came across your excellent web page explaining the tragic 2004 Indian Ocean tsumani, together with references to the Alaskan event.

The reason for my interest is that I am writing about annual Australian surf lifesaving championships, and in particular those championships that were held in very large surf. The surf lifesaving movement in Australia consists of thousands of volunteers around the country who give their time to train and patrol surf beaches. Since inception over 100 years ago, hundreds of thosands of lives have been saved.

In Easter 1964, I was participating in our annual championship at Collaroy beach in Sydney. Collaroy is normally a very gentle beach with small,regular waves. However, by Easter Sunday the surf had turned monstorous with waves quicly peaking to around 15-25 feet and then crashing on a sharply rising beach that had been carved out by the pounding surf. You may not be familiar with our Australian surfboats, but they are around 25 feet and are rowed by a crew of four, plus a sweep who controls direction with a large sweep oar. They are designed to handle very rough seas when other methods of surf rescue are unable to cope. However, on Easter Sunday is was carnage all round . Surf boats were being cartwheeled and spat back up the beach, with broken boats and bodies all round. It was not so much the sheer size of the peaking waves, but their awesome velocity and force after breaking that did the damage. Even as waves were diminishing on the beach, calf depth water was bowling over strapping lifesavers as if they were ninepins.

Clearly, no one had seen anything like this surf before ( or since). Luckily, no one was killed at our surf carnival and other Sydney beaches were closed, so this extraordinary phenomenon was soon mostly forgotten. My reason for approaching you is see if you may know of reference sources that may point to the effect of the Alaskan earthquake on the east coast of Australia. References in newspapers and other publications were scant and brief at the time. I suspect tsunamis were so unknown here at that time, that the impact on Australia after crossing the Pacific passed pretty much unnoticed and unrecorded.

Surf started to build on the Sat after Good Friday, raged all day Sunday, then began to abate Sun evening. All over by Monday. There has been nothing like it since.

Here was my response:

I don't know of any formal sources, but the timing suggests that the surf you experienced could have been influenced by the Good Friday '64 quake. As I'm sure you know, storms in the same area of Alaska are the main source of the huge winter waves of legendary surfing on the North Shore of Oahu, and have been implicated in such far-away changes as the breakup of ice sheets in Antarctica.

The path between the quake epicentre and Sydney is also fairly direct, with few obstructions (it even seems to skirt the Great Barrier Reef), so in my very amateur estimation, it's quite possible you did experience waves from the Good Friday quake in Sydney.

I agree that the wild occurence was a direct result of Alaskan earthquake, even though no study/records done. The east coast of Australia is very long and the Great Barrier Reef starts some 800 miles to the north of Sydney, so I guess wave action could easily span this barrier and hit unimpeded at sydney.

Does anyone think we're wrong?