My MacBook is a lemon 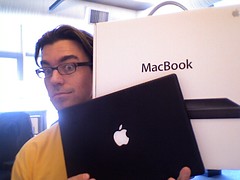 Back in May 2006, I ignored my own advice and bought a first-generation MacBook laptop from Apple, before the bugs were worked out of the design. It's a lovely computer, and I've had tremendous good use out of it. The keyboard is weird but surprisingly great, it's fast, the screen is bright and clear, and it still turns heads when I use it in public. Sure, the case smudges easily, but I don't care about that.

It is, nevertheless, something of a lemon. A 1.0 product, as I warned people it could be. The first signs came in the summer, when the MacBook occasionally refused to burn a to a blank DVD-R disc that my eMac or the iMac at work had no trouble with. Then, in the fall, it refused to recognize any blank DVD-R media at all. It could read and write CDs, and read DVDs just fine, so I put off having anything repaired, since I don't burn DVD-Rs all that often.

Then, in December, another ominous sign. Typically, when the battery gets low on a Mac laptop, the operating system recognizes that and pops up a warning: your battery is getting low, so either plug in or I'm going to sleep soon to save your data. Then, a few minutes later, another warning: no power left, I'm going to sleep now.

Not my MacBook. It would happily show as much as 15 minutes of power left, with no warning messages, then shut off as if I had yanked the battery right out. With Christmas and then this whole cancer diagnosis thing, I put off repairs again, but by earlier this month the battery life was down to two hours or less, and the Mac would report as much as an hour of battery supposedly left when the power cut out. Not acceptable.

So a couple of weeks ago, after an only mildly excruciating conversation with Apple phone support, I took the machine in, still well within the one-year warranty but also thankful that I'd bought the three-year extended AppleCare repair contract. The service tech was convinced that the shutdown problem arose from heatsink issues that had caused random shutdowns in early MacBooks like mine. The Mac came back last Tuesday with a new heatsink assembly and SuperDrive. It burns DVDs fine now, but the low-battery shutdown problem was as bad as ever. (Argh, Mr. Service Tech! I thought. Did you test your repair?!)

Then today came the worst bit: somehow during the disassembly or reassembly process at the dealer, something had gone wrong with the cooling fan, and it started making sounds like a small two-stroke engine (check out MP3 samples #1 and #2). Yikes.

So it's back in the shop. My wife's iBook, which is a little older than the MacBook but was a long-proven design when she bought it, is chugging along nicely with nary a hiccup. Even the computer I'm typing this on—my famous wireless PowerBook 1400, which is older than either of my children—can do the job. But I hope you're okay, little lemony MacBook. I still want you back—I'm sure not going to try editing any audio on this 1996 machine!