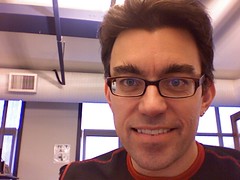 I haven't mentioned yet that I've seen my cancer. Along with my doctor and his assistant, I was the first to do so, though none of us was certain that's what it was at the time. Back in December, when I had a flexible sigmoidoscopy (basically, a camera up the butt), the display screen was just above my head, so I could see just as well as Dr. Enns what he was looking at.

He had been expecting some inflamed tissue, showing proctitis, but what he found, and what I saw, was a sizeable polyp. I watched (but fortunately, could not feel) the tiny claw-like pincers that he controlled take biopsy samples from it. A couple of weeks later, those samples revealed cancer, and now I'm on the road to surgery.

So I have a good mental picture of what we're dealing with. I know what the hunk of flesh they'll be removing looks like.

The strange thing about this interim time is that, physically, I feel pretty close to normal. I'm not ill. And if you think about it, surgery is just another name for inflicting serious injury under controlled circumstances, to prevent worse things from happening later.

It's like my doctors are telling me, "In a couple of weeks you're going to be in a car accident. You can't stop it, and you'll get better, but you'll be in the hospital and then you'll have to stay some for a couple of months. Get ready for it." There's mental dissonance about that. I know intellectually that this is necessary—life-saving and crucial, actually. But an emotional part of my brain is saying, "You're gonna let them do WHAT?"

Another complicating factor I didn't mention: while he was examining me, Dr. Enns also found what is likely a fibroid (or something like it) inside my rectum. It's another hunk of anomalous tissue. It seems, at this point, unlikely to be cancerous, and is apparently unrelated to the cancerous lesion itself. But my surgeon Dr. Brown may want to remove it along with the tumour, since I'll already be on the table.

That's something else I'll find out on Monday, when I hope to know when my operation will happen.