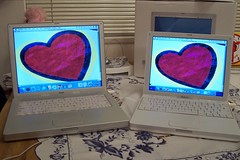 I'm a Mac bigot, in fact an Apple computer owner and user since 1982, before the days of the Macintosh. But I have lots of experience with other computer systems too, ranging from mainframes using punch cards and the TRS-80 Model I to Unix servers and modern Windows and Linux PCs.

I've never purchased a Windows box for myself, but that's not entirely because of my Macophilism—in part it's because I'm so familiar with the Mac environment, in part because if I needed a Windows box there was usually one at work or at my dad's house I could borrow, and mostly because using Windows is so often so damn annoying.

I hadn't thought about it much recently until I read an article (via John Gruber) by the Wall Street Journal's Walt Mossberg complaining about what it's like to start a brand new Windows computer for the first time. I'd forgotten about all the crapware most PCs include.

But I have noticed over the past few years, when Windows users see someone boot up a new Mac, they always—always, every time—comment on how friendly and pleasant the first-run experience is, with its soothing colours, clear questions, and (mostly) lack of attempts to entice you to buy more stuff. I'm not sure if they consciously notice the lack of crapware, but there's a definite vibe to the Mac first run that helps you enjoy the experience, whether you're geeky or not, Mac-head or not. It's a first impression that counts big time, so that even if you encounter some difficulties later—connecting to a wireless network or a printer, for instance—you're willing to cut your Mac some slack.

Conversely, every time I've had to set up a Windows PC, I feel like swearing, which is not a good way to start out. As Mossberg writes, "The first day of owning an expensive new gadget should be a pleasure, not a hassle."