Chemotherapy will last longer than I expected 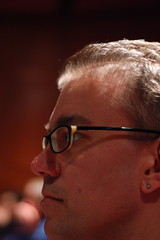 I thought that yesterday's chemo treatment (which continues, with a bottle I'm hooked up to right now at home, till tomorrow) would be my second last for now. But it won't be. My oncologist Dr. Kennecke recommended yesterday that I take at least four more treatments, totaling 16 since I started in October, then perhaps move on to a different mix of drugs.

That's disappointing, though not a complete surprise. As I mentioned, my last CT scan was good, in that the blood clot in my lung is gone and the small metastatic tumours there have not grown. But that's the thing: the chemo is keeping them at bay. Taking a break as I was hoping to—in order to recover a little and have the surgery that can reconnect my intestines together (so I can poo normally, rather than into a bag glued to the side of my belly)—might risk letting the cancer grow.

And, reasonably enough, I don't want that.

So I've had to readjust my thoughts for this year. When will I be able to start work again, even part-time and from home? I don't know. Will we travel as a family this summer? Likely, but probably not far. Will the chemo keep working, and maybe shrink the tumours eventually? I sure the hell hope so.

I had hoped that the limbo I've been living in during the last five months of chemo—a somewhat sisyphean routine of three days of crappy, foul, vile side effects interrupting two weeks of feeling relatively normal while my hair thins and goes rapidly grey, my fingers get strangely discoloured and dry, and I see pink whenever I blow my nose—might change soon. But no, and I'm okay with that. Just okay.

If my hair gets any scragglier and thinner, I'm seriously considering shaving my head to match my co-host Paul (whose baldness comes more naturally). Fortunately, I've returned to essentially the same weight I was before this whole mess started at the beginning of 2007 (about 90 kg, or 200 pounds), so if I do that I shouldn't look too much like a cancer patient, especially since I still have my big bushy eyebrows.

More positively, my doctor also said I should start exercising regularly again: there's no hazard from my lungs, which seem to be functioning properly, and I've regained most of my strength since my worst state in the summer. I may even ride my bike around Central Park here in Burnaby soon, more than a year and a half since I last took it out. Those tires will need pumping.

Sorry to hear about the extended chemo treatments. For the better I suppose.

Fingers crossed for you guys.

Hang in there, Derek.

Thinking of you lots,
Barb

Do the exercise thing. And if you can, go back to work. There's a danger in living through the disease, although I don't think you are doing that. I'd be inclined to work; my husband worked until a week before he died, and he was very happy. And don't take this wrong: he was 65, and his cancer was not yours. I'm just sayin' normalize your life and you will be more fit for whatever comes.

"Re-adjust your thoughts for this year"...what a great idea; another year with your 'girls'. Being a survivor i understand the day to day stuff that goes along with treatments. Keep up the positive, those thoughts will heal you.
Ruth

Hey, Derek. I check your blog frequently, but it's been a while since I've said hello. I'm sorry to hear about the extended chembo (chemo + limbo; patent pending), but if it kills the cancer, and allows you keep on (living, writing, playing, photographing, parenting...), then it's a triumph. Hard-won, but a triumph just the same.

My best to you and your family.

I vote against shaving your head, unless your hair gets really thin and wispy. I like the picture you have as your blog portrait right now. The look reminds me of Sam Neill, actually.

Keep at it!! All of us out here are thinking of you and wishing good things.

I'm glad to hear you've regained weight, and it is good news that you can exercise more. Adjusting your thinking as you are is, I think, exactly right.

As you know, I admire your process.

Hi Derek:
I wanted to let you know that I think of you often and am always hoping the best for you and your family.

Get well quickly. I hope to see you in person at Gnomedex and perhaps Podcasters Across Borders this year.

Keep staying healthy and you will come on top!

Hi Derek, I'm so sorry to hear about the chemo having to last longer. My son was on, what I thought, was his last treatment but we were told he would have to have one more. We won't know until we go back in a couple of weeks. At first he was upset, but then it's one of those things where we look at it that we don't want to cancer to have a chance to regroup and come back, so be it.
He had to shave his head after the first treatment because he had this big bushy head of hair (he's 16) and it was falling out everywhere in the hospital bed and he coldn't take it anymore. Now it's just a close shave with bald spots. He refuses to shave it with a razor because he thinks he looks like a Marine. A very gung-ho Marine that is!
Keep up the fight Derek. You really do inspire other people. : )