The curse of the new-ish lens 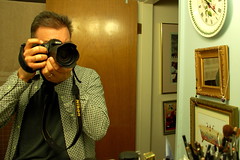 More than 15 years ago, the house I was renting with a couple of roommates was burglarized. The thieves stole the usual kinds of things—CDs and other stuff that's easy to fence—and included among that was my Nikon FG SLR and lenses. I had insurance, which replaced that camera with the early-'90s equivalent, the F-601.

The new camera came with a pretty decent Nikon lens, a 35–70 mm zoom. But a few months after I got the camera, the zoom ring on the lens became loose and didn't work properly. I sent it in for warranty repair, and then used the lens through two additional cameras (another F601 I bought after the original got dropped, and my current D50) until last spring.

That's when the zoom ring started misbehaving again, and I replaced it with a new Nikon lens, an 18–135 mm zoom that has worked very well for me, and is usually the kit lens for the higher-end D80 SLR. Until the past few days, when the zoom intermittently stopped autofocusing properly. The barrel of the lens also started to feel a bit loose. So I've sent it, like its predecessor, off to Nikon for repair.

I supposed there's a reason the lower-cost lenses aren't as robust as their professional siblings, but it's not like I abuse them. And that old lens did work great for me for a decade and a half after its initial repair. I still have it downstairs, in fact. Maybe if I can get it to behave I can use it while the other one is in the shop—but there's really no need. I have three other lenses that seem to be working just fine.