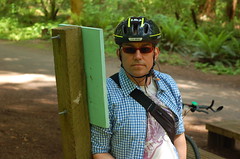 To misquote a recent Head & Shoulders shampoo ad, dudes don't usually talk about their hips, but today I will.

I haven't been very physically active since I got my cancer diagnosis nearly a year and a half ago. Before that, I regularly bicycled to work, about 12 km each way, and when I took rapid transit I'd often walk an extra stop or two past the closest one to get some exercise. Now that I'm back up to fighting weight (having regained the 25 kg—55+ pounds—I lost before and after my surgery last year), I'm making some efforts again in that direction.

But holy cow, am I inflexible. I've never been a yogi master, nor have I ever in my life been able to touch my toes. Still, yesterday when I took my bicycle out (the first time in months) for some errands and a ride through Burnaby's Central Park, I nearly fell over in our driveway, because my minimally-mobile hips almost prevented me from lifting my leg high enough to get on the damn bike.

Things improved some once I got rolling, and some of my stiffness was probably due to my Italian-sandal–induced wipeout a couple of days ago, but I also noticed that I really had to gear down the mountain bike while pedaling up even the slightest hill, and my speed on the flats was far from what it used to be.

I felt great when I got home, despite a bit of soreness, so I plan to ride some more in the next little while, particularly since I'm having a break from chemotherapy for the next few weeks. Some stretching would also probably be in order.

Great to hear you're up and biking again :) Isn't it a great feeling after you've been working out? I love that.

Well, you come by your inability to touch your toes honestly, Derek. I've never been able to touch my toes, either. At least I can't remember that I ever did, maybe I could when I was a baby.

Has your mom ever been able to touch her toes either? I never have, so I wonder if you got a genetic double-whammy in that respect.

I started jogging again last night after taking about 6 weeks off and ay carumba I feel your pain (in the hips that is... we're a long way from the Love Bugs at The Lunatic Fringe :)

Last night before going to bed, I looked up and tried (emphasis on tried) to get into a pigeon pose. (thank you youtube and google image search) Holy-starburts-before-my-eyes, Batman!
Fortunately after forcing myself to breathe normally and holding it for 30 seconds per side--twice-- I shook 'em out. My legs and especially my feet felt warm and tingly and the tightness in the hip flexors went away and I was able to get to sleep soon after.

"I was woken up at 3am by DKM. He was in pain and his bowels had stopped moving. We went to the ER where they treated him with morphine. By 7am he was feeling better so they send him home. Hopefully a liquid diet today will help. His X-Ray showed no blockage (phew!)"

I hope you better... I just die if my wife posted this on her site... that why i'm posting anonymous... lol.... you know the bike riding might had something do do with it... well, I'm glad your better now... But dude have here replace the words "bowels and blockage" :) ;)

If the words bowels and blockage bother you, I suggest you avoid my latest blog post.

I've been enjoying your Vancouver photos for some time, so I've decided to let you know about a Vancouver photo contest, recently started at https://jaybanks.ca

Here are the details: https://jaybanks.ca/vancouverrealestatenews/2008/05/30/contest-june

You can win a $200 cash prize with your photo depicting Vancouver BC.
If you think your Vancouver friends would also be interested in joining the challange, you can let them know, too.