Return of the pecker

Remember this guy, the crazy Northern flicker woodpecker who used our kitchen stovepipe for a sounding board last March? Who woke us up every morning around 7 until we wrapped the metal chimney in bubble wrap? Who we thought was gone for good?

Well, he's back. Or was. Yesterday morning around 8 a.m., suddenly there was that familiar machine-gun metallic banging in the kitchen again. (The later hour makes sense, since it's over a month earlier in the season, so the sun is rising a bit later too, and I expect these guys time their noisemaking to the light.) I'm not sure if the bubble wrap fell off in the winter winds, or whether my dad, who lives in the other half of the duplex, removed it at some point. 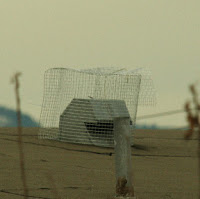 UPDATE: My dad set up a nice solution to the problem, as shown in the photo. Let's see if it works.

When the pecker started pecking, I was in the kitchen, so I immediately turned on the noisy stove fan again, and the banging stopped. Encouragingly, there was nothing today. But listen, flicker, I have my ear out for you. You'd best mosey along before we take action again.

This is not a purely Vancouver problem by any means, as I found out from the Bad Astronomer in Colorado last year.

On Feb 2, CBC's "As It Happens" interviewed Maureen O'Rourke of Rossmoor, California, about that community's plans to kill about 50 Acorn Woodpeckers for doing en masse what your one is doing. Google "Rossmoor Woodpeckers" for more.

I had a similar problem with a Cardinal when I was younger, although he started at 5am and pecked at my window.

I eventually stopped him by putting a motion detecting owl in the window that hooted and lit up whenever he showed up.