Airliners are modern miracles of science and engineering 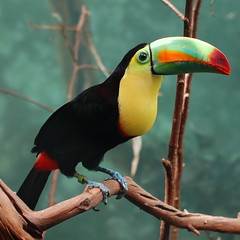 We've just returned from a whirlwind trip. My daughters had an extra day off school, a professional day following the Victoria Day long weekend, so we made quick plans to stay in a hotel in the Seattle suburb of Lynnwood, Washington, a couple of hours' drive south of here. But to thread the needle of long weekend border traffic, we crossed our station wagon into the USA on Sunday and returned Tuesday.

I'm not quite sure how we fit all we did into the 54 hours we were away, but it included a number of family firsts. My older daughter is a big fan of shrimp, and has been enticed by endless ads for the Red Lobster chain of restaurants. We have none in Vancouver, so Lynnwood offered the closest location, and despite lingering memories of a 1995 food poisoning incident at a California location on our honeymoon, my wife and I agreed to go. We all enjoyed our meals there Sunday night, without later illness.

That was the least of the newness, though. My wife Air and I have traveled to Greater Seattle many times over the years, separately during our childhoods and together since we started dating, both with our kids and without, for fun and on business, as a destination and on the way elsewhere. Yet somehow neither of us had ever visited the wonderful Woodland Park Zoo, or Lynnwood's famous Olympus Spa, or Boeing's widebody jet factory in Everett. This trip we covered them all: the kids and I hit the zoo, Air visited the spa, and all four of us took the Boeing tour today on the way home.

The zoo impressed me, especially the habitats for the elephants, gorillas, and orangutans, but while it was a much shorter activity, the Boeing tour was something else. If you live in this part of the world (Vancouver, Seattle, Portland, and environs), and you're a geek who likes any sort of complicated technology, or air travel, or simply huge-ass stuff, you must go, especially considering there's nowhere else in the world you can easily see something similar. The Airbus factory in France requires pre-registration months in advance, with all sorts of forms filled out and approvals and so forth. We just drove up to Everett, paid a few bucks each, and half an hour later were on our way in. 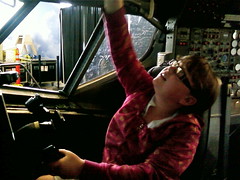 Unfortunately, you're prohibited from taking cameras, electronics, food, or even any sort of bag or purse beyond the Future of Flight exhibit hall where the tour begins, so I have no photos of the assembly plant itself. Trust me, though, it is an extraordinary place. A tour bus drove our group the short distance to the structure, which is the most voluminous building in the world. (Our guide told us all of Disneyland would fit inside, with room for parking. Since the plant is over 3,000 feet long, I figured out that the Burj Dubai tower, the world's tallest building, could also lay down comfortably on the factory's floor space.)

From two separate third-level vantage points inside, accessed by walking down immensely long underground tunnels, then taking freight elevators up into the factory's rafters, we saw more than a dozen of the world's largest aircraft in various stages of assembly. They included several units of the venerable and massive Boeing 747 (its still-revolutionary design is older than me); a couple of nearly complete 767s; a string of 777s in their slow-crawling, constantly-moving U-shaped assembly line; and finally a trio of 787s—a design so new that they are built mostly of composite materials instead of metal, and not even one has yet entered commercial service.

The end of the tour took us outside again on the bus, past the painting hangars and numerous planes waiting for pickup by airlines, as well as one of Boeing's three Dreamlifter cargo monsters, created by cutting off most of the upper half of an old 747 and installing a huge new fuselage top, purely to bring in assembled parts for the new 787s, to be fitted together inside the factory.

While that facility is one structure, which has been expanded over time, each type of plane built there demonstrates how aircraft construction, and industrial assembly lines in general, have changed in the past 40 years. 747s are still built at numerous discrete stations, as they were when the Everett plant first opened in the 1960s. As I mentioned, 777s come together in a single, steady-moving U-shaped line, apparently inspired by the envied Toyota Production System, each plane edging forward steadily at 1.6 inches per hour.

Finally, the new 787 comes together in a short, simple line across the width of the building. That's because (as with competitor Airbus's planes) sections of each aircraft arrive nearly complete from other factories around the world on the Dreamlifter cargo carriers, and are put together in Everett, rather than built from scratch.

I came away newly inspired by the modern miracle of science and engineering that is a jet airliner. These machines are what enable us to complain about waiting around in airports for a few hours, and about substandard in-flight food as we fly between continents—while forgetting that not many lifetimes ago, and for all of human history beforehand, similar voyages might take have taken us years instead of hours, facing danger and starvation and death, if they were possible at all.

Then, on the way home, we bought a bunch of squeeze cheese, also unavailable here in Canada.

Such a great post. This makes me want to take the kids on that factory tour. The Air and Space Museum in Washington D.C. is something you would surely enjoy too.

Seattle's Museum of Flight, south of the city, is also great fun, although my wife and I have been there only without the kids. The Boeing tour is great in a different way, because it's a real working factory. What's surprising is that, even though 10,000 people can be working there at any time, you can only maybe see a few hundred of them from above, and it's a surprisingly quiet and deliberate place.

P.S. Here are some pictures of our Museum of Flight visit in 2006.

I can't believe I've been going to that neck of the woods my whole LIFE and never been on this tour. We have to go!

Hey, I've lived in Vancouver since I was born, and I've never been whale watching, which is the first thing many tourists do when they get here.

What's the youngest you could see taking a kid to the Boeing factory? Just curious, as I have very young kids and would love to make a future trip. Tks.

The tour doesn't allow kids shorter than 4 feet (about 120 cm), so that's an easy criterion. Other than that, it would depend on their interest. Any kids obsessed with planes or other big machines would love it, as long as they're tall enough to be allowed in. The factory views require you to look over a railing, which in most places is opaque, and for safety you're not allowed to lift anyone up, so the height restriction makes sense. It's a working factory tour, so follow the rules and it will work fine.