The Kindle DX is getting there 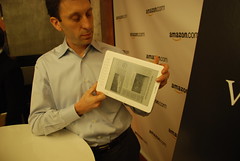 I have to say, Amazon's newly-announced Kindle DX, with a much larger screen than the original Kindle, is looking pretty good as an e-book reader. It's bigger, has more storage, and reads PDFs natively without conversion.

Too bad that, like its predecessor, it's unavailable in Canada (or anywhere outside the U.S.). It remains a bit of a polarizing device, but Amazon obviously believes this is where things are going. They're one of the only companies that might make it happen—if they're right about e-books being the future.

The DX is pricey, at almost $500 USD, and its e-ink technology is still a bit immature. However, maybe in a few years we'll be reading those Stanley Kubrick–style book pads after all, only a decade or so late.

I want one so badly it makes my teeth hurt, and curse the lack of availability in Canada daily. Curse you, Amazon!