The neighbourhood of weird signs

Most of the street-name signs in Burnaby, the Vancouver suburb where I live, are the standard metal stick-out-from-the-post type, like this one: 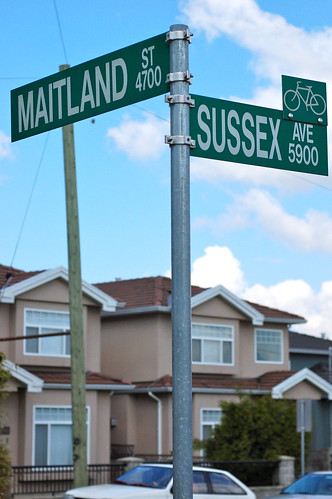 However, a couple of decades ago, just up the block from us, the city installed this one, entirely vertical in design and mounted on a girder rather than a post. And I haven't seen another like it anywhere in Greater Vancouver: 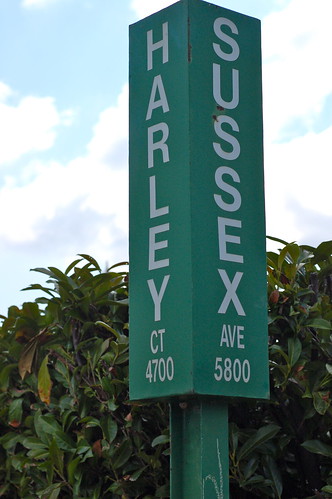 It's not genuinely bizarre—it's still white on green, and if all the signs were like that, things would work just fine. I just wonder why it's different from all the rest. (UPDATE: In the comments, visitor RentingSucks provides the explanation, which is funny, and logical.)

Across the street from those two is this masterpiece, which I still consider the most confusing road sign ever: 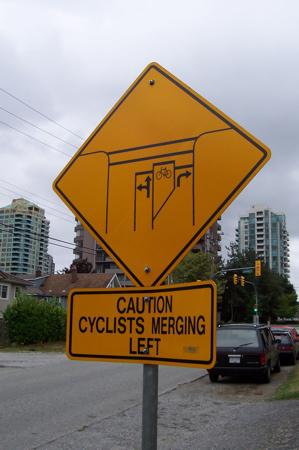 Maybe there's a secret road sign experimentation division down by Burnaby City Hall that I don't know about, and our street is its main lab.

Man, I just thought you were making a pun on 'Mate-land' and 'Sus-sex'.

I've lived in this neighbourhood since 1971, so the potential double entendres in street names don't even register with me anymore.

Yeah, I am confused too!

The Harley sign is specially reinforced because it kept getting stolen. Apparently it looks good in a biker den as it references a very popular motrocycle. I heard this from people that live on that street.

Well, how about that? Since that street is so short, that's the only sign for it too. Very clever. I wish I'd had the Internet to find that out back when it was originally installed.

Incidentally, back then a house kitty-corner from mine, and about three blocks from the sign, was a biker clubhouse, so that might have been extra incentive.

Thanks for the long-awaited answer!