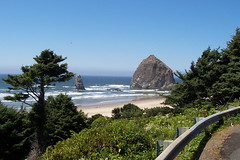 My wife, kids, and I have spent quite a bit of time in Cannon Beach, Oregon, where we took our summer vacations several years in a row. We like the place: it's in the United States, another country, yet it's part of the same sort of coastal ecosystem as we have here in British Columbia. So it's familiar, yet foreign, and one of my favourite places.

Today my parents, who are returning from a road trip to San Diego, have happened into staying a night in Cannon Beach too. They phoned me tonight as they had a light dinner and wine on the patio of their motel, watching the sunset. Today is also their 44th anniversary. They like the place too.

Incidentally, after they checked in, my mother realized that, decades ago, she had stayed at the same motel with her longtime friend Erlyne.