20 years behind the kit 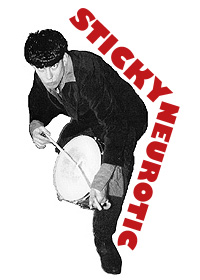 Twenty years ago this spring, I played my first gig as a drummer, at the Last Class Bash for the UBC Science Undergraduate Society. Our band, the Juan Valdez Memorial R&B Ensemble, was a five-piece with me on drums, my roommates Alistair, Sebastien, and Andrew on guitars and bass, and Ken Otter (now a professor of zoology) on another guitar.

We'd spent months rehearsing, but we still didn't know how to sing proper harmonies. Our playlist included mostly old songs from the '60s: "Gloria," "Long Cool Woman," the theme from "Batman." I skipped a final lecture for one of my high-level biology courses to set up for the show in the Student Union Building party room. Our friend Steve ran the rented PA system.

We were relatively terrible, but we were silly, and we had a good time. So did the heavy-drinking audience.

I'm still playing in a later version of the same band. Sebastien is still on guitar, I'm still on drums when I feel up to it. We're still playing some of those same songs. I've spent half my life in this act.

Wow.. figuring out the years, if I hadn't decided in my second year that Chemistry wasn't for me, then I would have been there.

This surely will have already occurred to you, but it's awesome that a guy with the last name of Otter became a zoologist.

I really should have become a podiatrist.

Alas, he studies birds. But I don't work down at the mill either.

I thought I had a good memory, but yours is clearly far better than mine, because even after seeing my name in your post, I don't remember doing it :)

I think my first-ever gig was a bigger deal for me than for you, so I probably remember more details!