Being in the audience for Q

CBC Radio's "Q" is a national, Toronto-based, daily arts, culture, and entertainment show hosted by Jian Ghomeshi. For some reason I don't quite understand, I wasn't too fond of him before—I'd garnered a bad impression and it just stuck with me. (Maybe it was a Moxy Früvous hangover.)

Anyway, tonight my daughter M and I trotted down to the CBC building in Vancouver for a live-in-front-of-an-audience taping of "Q," to be broadcast on the radio tomorrow. The show has been in Vancouver all week before the Juno Awards (Canada's equivalent to the Grammys) on Sunday, which my wife and I will be attending. I took some photos: 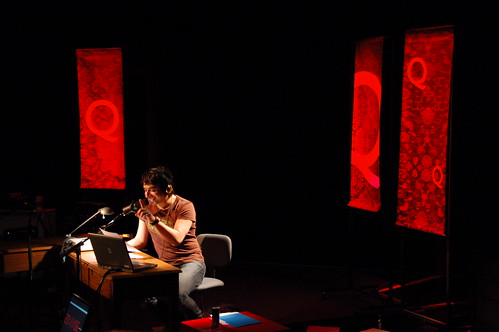 Musical acts performing tonight included Hawksley Workman, Divine Brown, and Hot Hot Heat. Bif Naked also dropped in for an interview, as did Torquil Campbell of Stars. And I have to say, in person Ghomeshi is engaging, open, and personable. I think I've become a fan.

I think Jian is very underrated. He is one of the best interviewers around. Does his research. Asks unexpected questions. Even Barbara Walters is a fan.