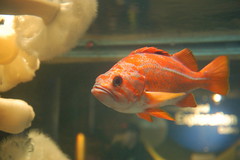 I just acquired my first stabilized camera lens, and I'm impressed so far, especially because it didn't cost me anything. Here's the story.

Last year I had my relatively new Nikon 18-135 mm zoom lens (designed for the D80 SLR, but bought for my D50) repaired under warranty, after the autofocus became unreliable and the lens housing felt loose. Unfortunately, Nikon's low-end lenses don't seem to stand up especially well to the usual wear and tear of enthusiastic use, because recently I had the same problem again with the same lens: unreliable autofocus and loose feel with the lens mounted on my camera, less than a year after the repair.

(By the way, I have a couple of much older but higher-end Nikon lenses that continue to work flawlessly despite their advanced age and considerable use. The problem is either with the company's more cheaply made lenses or with the particular one I owned.)

Anyway, the lens is covered by Nikon's excellent five-year warranty. So once I sent the zoom in for its second repair, Nikon had a look at it and decided to send me a replacement instead: the newer 18-105 mm VR zoom, introduced with the new D90 SLR a few months ago. While it doesn't zoom in quite as far, the newer lens includes Nikon's vibration reduction system—that's what the VR stands for.

What is vibration reduction?

What Nikon calls vibration reduction (VR), other camera makers call image stabilization (IS) or shake reduction (SR).They're all the same thing. Vibration reduction is a new technology, emerging in commercially available optical devices only in the last ten years. It can be built into the lens (as Nikon and Canon do) or the camera body (as Sony and Pentax do), but both work basically the same way: motion sensors detect the tiny shaky movements you make when hand-holding a camera and compensate for them by moving lens elements (Nikon, Canon) or the camera sensor (Sony, Pentax) with tiny motors.

At slow shutter speeds or long focal lengths, that reduces shake-induced blur in your photos. The technology doesn't make moving subjects (people, vehicles, animals) less blurry, because it can only compensate for things that make the camera vibrate.

But within its limitations, VR works quite well. Take a look:

When using VR, looking through the viewfinder can be a bit strange, because the image you see is steadier than your hands. It's even more noticeable on my dad's image-stabilized binoculars, which magnify the image quite a bit more than my zoom lens, and stabilize both eyepieces. You can feel your hands shaking quite a bit as you look through them, but the image moves in a much more "damped" manner.

The result is great, because both in a camera and through binoculars, you can see more clearly when VR is on. And when you take photos of stationary subjects, you can shoot with shutter speeds one or two stops slower (i.e. taking in only 25% as much light, maybe even less) and still get decently sharp pictures.

It's not the same as having a lens with a wider maximum aperture, or a camera with better low-light sensitivity (ISO), but it's another tool to help make better images.

Just to show how well optical stabilization can work, the link below points to two images of one of my card readers. One hand-held picture was taken with available light (exposure calculated and made automatically by the camera). The exposure turned out to be one second. The other picture was taken with a flash, using the same camera. The available-light shot is almost as sharp as the flash picture - amazing for a 1-second hand-held exposure.
Here is the link (copy and paste into your browser URL window):

I've never understood the appeal of most IR lenses. The only exception is the 70-200mm f/2.8L. Other than that, I find that they simply sacrifice the two-three stops on the lens, put IR on, and then brag about the fact you'll get 2-3 more stops by turning on the IR. For example, my first IR lens was a f/5.6 I believe, which is terribly slow. Also, while you may be able to hand hold a shot to keep the image relatively stable, you can't stop people or shrubbery from moving their normal speeds, and you end up getting a lot of motion blur due to the long shutter times.

I agree, Duane. I really noticed because my old un-stabilized lens went to f/3.5, and so does the new one. The difference is noticeable. It's fantastic for my dad's binoculars (which cost something like $1200, I think!), and for very long lenses like wildlife photographers use, where even a sturdy tripod might not damp all the motion you need.

But for photography, like you, I'd much rather have a quality fast lens in most circumstances.