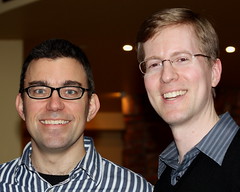 In 1974, on my first day of kindergarten, I made some friends. One of my earliest memories of school that year was three of us working on an art project. Rand, one of my friends, had a huge (huge for five-year-olds, at least) bottle of white glue turned upside down, but like a ketchup bottle, it was jammed.

Brent, my other friend, sang out, "There's no more gluuuuuue!" And then a huge glop of it fell onto the paper, completely covering up what we were working on.

I stayed friends with Rand and Brent for many years afterward. When Brent's family took a year away to go sailing around the Caribbean, we borrowed their TRS-80 Model I personal computer, the first one we had in our house. Rand and I spent hours at each other's homes, or with his family at their cabin on Keats Island, playing with Star Wars action figures.

Even when Rand changed to a West Side private school and his family moved out that way, we kept in touch, and a couple of years later I went to that school too. We lost touch with Brent slowly after that, though he was in my Boy Scout troop until 1982, and I have seen him from time to time in the interim.

Rand and I once tried making smoke bombs at his place, and drying them in the microwave. Not a smart move. We had to open all the windows and pull out the smoke alarm battery, hoping things would clear before his parents got home.

Eventually, he moved to yet another school and, as happens, we drifted away from one another. He emigrated to New York City almost 20 years ago, got married, and had a son. I stayed here in Vancouver, got married, and had two daughters. My daughters started kindergarten at the same school where Rand and I met a few years ago. They're still going there.

Recently Rand and I got in touch again on Facebook. He and his wife and son were in town last week to visit his family, and on Friday night my girls and I met them downtown for dinner. It was a short visit, but fun—the first time Rand and I had seen each other for more than 25 years. Long enough that he had time to grow taller than me.

We were both pretty big nerds back in the '70s and early '80s. Our nerdiness has mellowed, and it's also cooler to be geeky these days than it used to be. So we're different, yet not. Just like Vancouver.