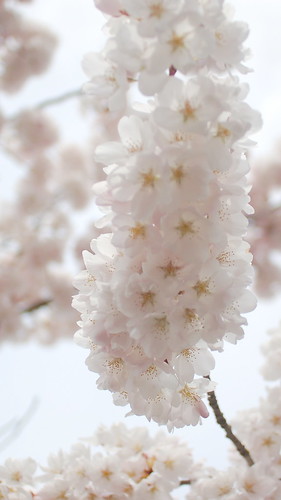 I don't scour the Web for cancer news. Having cancer myself means the topic is enough on my mind already without reading too much more about it, and I don't seem to be the type to leap wholeheartedly into cancer advocacy as some do. Yet interesting stuff still comes my way.

It's also easier to read that stuff since my last CT scan was more encouraging than usual—even if today I'm having a worse-than-usual bout of side effects from my medication. I've been sitting on our recliner couch most of the day, and have to stay close to the bathroom all the time. (Hey, minimal carbon footprint!) So, some of my reading today:

As for me, I expect the side effects to calm down this afternoon or evening. I may go take some pictures in the yard right now. Maybe tomorrow I can get out and snap some more in the sun, and then go see one of my daughters read at her school for literacy week.

This is my third spring with cancer, and I'm glad to see it. Here's hoping for a bunch more.

Your reflections on being a young family man living with cancer have shown me, in vivid and poignant terms, the contrast between an outlook that focuses on the cant do/wont do's and one which relishes the will do because you still can do's. This is a spectrum of optimism that applies in countless situations but few so dramatically as ones such as yours.

I'm not sure if there is a lesson to be gained from your constructive attitude, or if such is an innate property born of the right blend of nature and nurture that a person either has or does not have. Maybe you've contemplated this yourself and if so I'd be very interested to hear your thoughts.

Happy third and counting Earth Day as a survivor, Derek!

i will drink to that. with airdrie! ;)

Years ago I wrote a piece of software for UBC to issue receipts for charitable donations, including gifts in kind. This inspired me to look into whether UBC was obliged to provide a tax receipt if you donated your body to science, and if so, how its dollar value should be calculated.

The uninspiring answer is that no, there's no tax receipt, and a human body is legally considered to have no cash value. Mostly I think I'm relieved to know this, but at the same time I've always been slightly disappointed.

So I guess your family should melt down any gold fillings first.