Join me and The Neurotics at the Sun Run tomorrow

UPDATE: Here are the latest photos from the 2009 run. 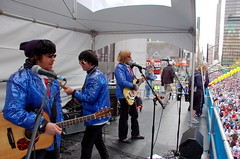 The biggest shows I've ever played with my band The Neurotics have been our annual performances atop a scaffold, at the starting line of the Vancouver Sun Run. Tomorrow, Sunday April 19, 2009, marks the sixteenth time the band will play at the event, and is the tenth time I'll be there on drums. (I left the band for a few years in the '90s, and missed 2007 because of chemotherapy.)

Anyway, it's quite the crowd—last year more than 55,000 people ran past our stage, which is like playing for a sold-out B.C. Place Stadium. Sean, one of our guitarists (turning to the left in the photo) calls the gig a "heads-up hockey" show: there are lots of stops and starts, usually without much warning, as run organizers make announcements and start each wave of the run. There are few if any breaks. We have to be hyper-aware of what's happening for several hours in a row. But it's lots of fun.

This year we're taking a different approach than usual. Every other year we've had four musicians on the scaffold, but this time we'll have six, adding an additional percussionist and a singer. We'll be just as silly as usual, however, so if you're heading down to the Sun Run, wave hi. I'll be on either drums or percussion when you come by. Alas, chances are I won't be able to see you in the mob, but you never know.

I'm so jealous. That would be awesome to play at.