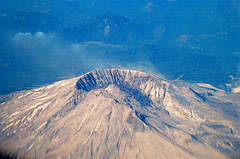 On the morning of May 18, 1980, exactly 29 years ago, I was camping with my Boy Scout troop at Furry Creek, north of Vancouver on the shore of Howe Sound. (The location is now part of a large golf course development, but at the time was essentially just forest near the highway.)

We awoke, terrified, to an enormous thundering crash. It was not, as we had thought, a train derailment on the railroad right near our campsite. It was the titanic sound of the eruption of Mount St. Helens—a sound which had arrived after traveling about 300 km northwest from the explosion. Back in Vancouver, my dad thought our water heater had exploded in the basement.

It was a good reminder that we live in a zone of earthquakes and volcanoes.

My family was boating on Shuswap lake when it erupted. We thought someone had fired a shotgun in the nearby forested area.

I was at my grandmother's in a tiny town in Eastern Washington state. It was mid-afternoon before we found out that it was not a storm heading in from the West. About 3:30pm, the ash began to fall. My parents had been in N. Idaho celebrating an anniversary and although they rushed back to us, they were stopped about 20 miles away. We stayed there until Thursday (the mountain erupted on Sunday). What a mess. What a memory.