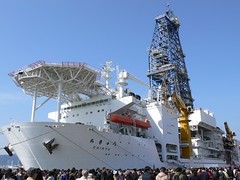 At first, you might think a cruise ship collided with an oil rig and then crashed into part of a highway overpass, but no, it's just the M/V Chikyu (via the Maritime Blog). Here's how the BBC describes it:

The idea was simple. Scientists wanted to drill down into the Earth's crust—and even through the crust—to get samples from the key zones 6 or 7 km down where earthquakes and lots of other interesting geological processes begin; but that was impossible with existing ships.

Solution: find six hundred million dollars, and design and build a new one.

The crazy structure on the front is a helicopter landing pad. During construction, the ship was nicknamed "Godzilla-maru." And you know, $600 million is a lot of money, but it's not outrageous considering what this vessel does. It's the same price as only two or three 747 jets, for instance.

Reminds me of the Glomar Explorer, or, at least, of the Discovery Channel's CGI recreations of it.