My tumours have shrunk for the first time ever 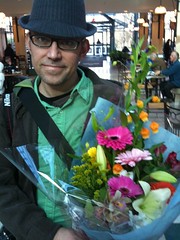 Today I heard something I've never heard before: "your tumours have shrunk." Through all the many different varieties of chemotherapy and radiation and immunotherapy and experimental Phase 1 drug trials I've put myself under during the past three years, only surgery has ever knocked my cancer back. Everything else, at best, kept it at bay.

Until now. Of course this is good news—but that's all relative. The tumours I showed you back in September are still pretty big, but they are measurably smaller than they were in November. And that includes the new ones that had just appeared in the fall. So I still have cancer, a lot of it all over the inside of my chest, but just a little less of it than I did a couple of months ago. As I wrote to some friends, I'm not out of the woods, but at least I'm no longer sinking slowly into quicksand either.

Thus, this afternoon on the way out of the cancer clinic, my wife Air and I smiled a little, held hands, and bought some flowers to put in the house in celebration. Later on we had takeout sushi with the kids. And tomorrow I go back in for more chemotherapy, which I hope will continue to beat the shit out of those metastatic growths.

So I'll be a sleepy, nauseated lump of crap for the next three or four days. A bit of good news doesn't suddenly make things go easily, you see.

That is great news. What an encouragement.

Made my day Derek! Great news.

Awesome news, Derek! And it's nice to see a smile on your face, too!

This is the best news I've heard today. We're all pulling for y.

Here in Paris, we are so very happy to read at last some good news !

Cancer is never stable : it either goes worse and worse, either shrinks from treatment.

We have been waiting for this kind of news for real long !

YAY!!!!! The best news I've heard in a long long time. Love your picture, the flowers, their colours and you add to the essence of what was a good day. Keep holding hands, keep smiling ....you are a great warrior!

This post really made my day, made me smile, and tear a bit.

Sweeet!!! Learned about the good news from @kk over on Twitter. Giving you the love he suggested:-)

Great news! See you at Gnomedex in August.

That is awesome news, learned it from your friend KK..truly news to be shared and celebrated, long may you hear news like this x

You're a patient for now - you will be a survivor forever!
Fuck cancer man!!!

Very glad to hear such good news. You've been having a tough journey and I thank you for sharing it.

Hi Derek. You don't know me but I wanted to stop in and say thanks. I just finished watching the video that was recorded at Gnomedex in 2007. It reminds me very much of myself at times. I can relate to a lot of what you said in that video, although I think you have had a better attitude about it than I have. I was diagnosed with a Mixed Glioma two years ago and it's been a hard road. The hardest part has been keeping a positive attitude. That is what I wanted to thank you for. Sometimes it's nice to have a reminder from someone who has walked the same path.

Sweet! That's excellent news. First of many such reports, I hope.

Excellent. I loved seeing this bit of news today.