How did it get here?

A desiccated fruit husk, about 5 cm long, sat delicately on a nearby lawn this afternoon. I spotted it while walking the dog: 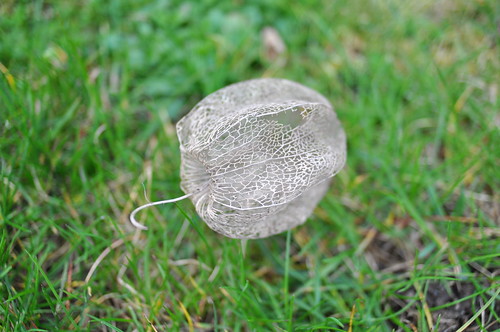 Did dry out like that naturally? I've seen similar veins-only leaf skeletons around, but this seems much more fragile: 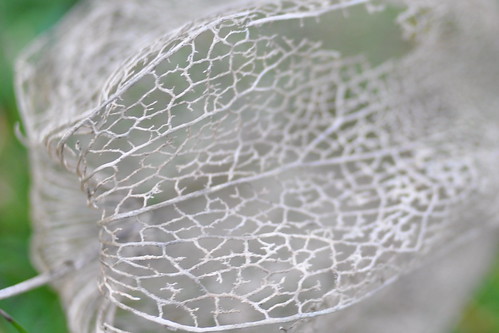 I wonder what kind of fruit it was, and how it got there.

Hello. I think this is similar to what is seen in Japan very commonly.
https://en.wikipedia.org/wiki/Physalis_alkekengi

As per @quinnh, except we usually call them "Chinese Lanterns". They're bright red or orange when they're in season, then become this skeletal husk after the flower dies. See https://bit.ly/cab0XR for example.

I once found an empty frog husk. It was like the skin of a frog had been freeze-dried and the frog innards had been somehow removed without damaging it at all. Showed it to Mom (I was young) and she was perplexed as well.

I like it when there's beauty in the discards of nature.

Thanks for the pointers. My guess is the husk was sitting on a Chinese lantern plant in a garden, and our most recent windstorm blew it onto the grass.

And that frog sounds mighty weird, Gillian. Too bad there's no photo. Would be cool.