A weird way to hit a weight target 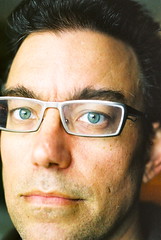 A few years ago, before I got cancer, my doctor told me that an ideal weight for someone of my height and build was around 185 or 190 pounds (84 to 86 kg). Since I'd been hovering around 200 pounds for some time, I didn't worry too much about it. I was relatively healthy (despite my long-time Type 1 diabetes), eating reasonably well, cycling to and from work, and so on.

Then, of course, came the diagnosis. Over the next three and a bit years, among a hell of a lot of more alarming things, my weight fluctuated wildly—as low as 145 pounds (in mid-2007) and as high as 215 pounds (a couple of years later).

When I started on my latest chemotherapy regimen in December, at first I seemed to be losing about 5 pounds each treatment, which wasn't a good trend. I adjusted what I ate (i.e. more, when I could eat), and things stabilized. Guess where?

I would not advise this method to reach a weight your doctor recommends for you, however.

i lost 3 more pounds with this last bout of awful... putting me at an even 90. the lowest i've weighed since... highschool? (my most was after 1st yr university of course, 112)

it's seriously freaking me out a bit, as i've been pretty well unable to gain anything back over the last couple years. :-/ i'd REALLY love to at least get back up to 95 if not 100.

did your regular doctor help you out at all with advice on how to gain it back? i've been wondering about seeing a dietician again but the one i tried before was SO useless!

No, I just resolved to eat a little more than I quite felt like once my nausea died down sufficiently from each chemo round. And a bit more of the calorie-rich stuff, which isn't too hard. :)

It helps that my intestines are a less crazy than they were with my previous treatment (the initial weight loss may have resulted from an overlap of side effects from the different sets of drugs). I really just have to compensate for not eating much at all for three or four days every two weeks.

that's really great your intestines aren't as crazy. now having actually seen how bad it can get, that means something a bit more! that's the thing, making up for like... months of not eating quite enough is SO hard when things still aren't really quite right.

i guess i really ought to make a dedicated effort to push the boundaries of how much i actually want to eat... (since there aren't a ton of high cal foods i can handle)

I know it's not your thing, but I worry when people focus on weight. It seems to me the least interesting indicator of health (except for extreme values of n). Much better to focus on specific goals of strength, agility, endurance, eating, and other health lifestyle elements.

If someone does need measures to focus on, the tape measure and body composition index are much more telling.

I didn't really make it eloquently, but that was sort of my point. I'd much rather be the 200-pound me of 2005 (which I was happy with at the time anyway) than the 185-pound me of today. In fact, if there was almost anything at all I could do to return to the state of health I was in then, I'd do it.