Commentary About PowerPoint and Presentations 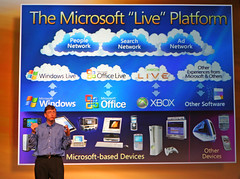 Here are some links to some articles and postings, some of which I have written, and some I found elsewhere since late 2003. They're all about presentations and Microsoft PowerPoint. I originally compiled this list for students in the Vancouver Film School Foundation program, to whom I gave a talk—okay, okay, a presentation—on 5 December 2003. But I add to the list periodically, so check back at penmachine.com/powerpoint from time to time to see what's new.

Back at VFS in 2003, I showed only two slides to those students. One of them was this picture, and the other pointed to the page you're reading now.

Now to the list. I slag PowerPoint a lot here, but my point is that if you know its flaws, you can avoid them and maybe use the program effectively to do what you need to do: tell a story. The newest entries appear at the bottom of this list, so scroll down if you've been here before.

© 2003-2010 Derek K. Miller. Some rights reserved. You may use content from this site non-commercially if you give me credit, under the terms of my Creative Commons license.