He don't need no purple 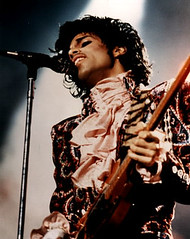 I just watched a rerun of Saturday Night Live from last month, when Steve Martin hosted and Prince was the musical guest. Sadly, the comedy wasn't anything outstanding.

However, Prince is quite possibly the most naturally talented popular musician of the past quarter century. His opening number, the Hendrix-meets-Santana song "Fury," featured some absolutely incendiary guitar playing—which was even more impressive for a guitar geek like me when I saw and heard how he was tap-dancing on his effects pedals the whole time, and singing.

His later duet with singer Tamar rocked in an entirely different way: Prince himself hung back as a mostly backup vocalist, playing mean, growly funk rhythms on his classic Telecaster (possibly the same one in the photo here, from the 1980s) through all sorts of starts and stops, always deep in the groove.

In both performances, his raw musical energy was palpable. He well deserves his comeback—and any money you spend on his music over at iTunes using my affiliate link. Ahem.