Accelerated treatment is a good thing 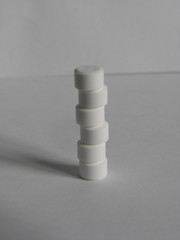 Remember two days ago when I said that if I were accepted into the clinical trial for enhanced drug therapy plus radiation that it would delay things by a couple of weeks? Nope.

I will be in the clinical trial (the study is known by the acronym "A-CORRECT"), but by some magic the trial nurse managed to slot me in to get started this upcoming Thursday, March 29, rather than a week or two later as we expected. So tomorrow, Monday, I'll have some blood tests, an ECG, and a simple flex-sig biopsy, just like the one that initially detected this whole mess back in December.

Three days later I will start intravenous treatments of the nearly unpronounceable bevacizumab (a.k.a. Avastin™ from our pals at Genentech). Around the middle of the month I will begin radiation treatment, along with the additional chemotherapy drugs oxaliplatin and oral 5-FU.

That should finish up in mid-May, meaning my surgery should happen in late June, in time for my birthday, and followup chemotherapy will then begin in late July. Because of the accelerated schedule, there probably won't be time for me to get the PET/CT scans, but that's okay by me.