How to unblock a Stratocaster tremolo 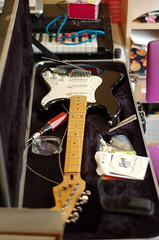 Back in 1990, I spent a couple of hundred bucks (quite a bit for me at the time) on a used Squier Stratocaster electric guitar, made in Korea. It's seen a lot of use in the intervening years, acting as the main guitar for both Sebastien and Alistair in our bands until they each got their own better instruments, and providing most of the guitar sounds on all the podsafe tunes I've recorded and released. (It's on my album cover too.)

While Alistair was using it, he had the vibrato mechanism (more commonly known, incorrectly in theory, as the tremolo system or whammy bar) blocked so that it acted like a guitar without one. He later did the same to the guitar that he bought to replace it—also a black Stratocaster, but a higher-end one. Blocked or "hard tail" guitars generally stay in tune better than those with tremolo arms, so I liked that blocked mechanism too, and I kept it that way over the past 15 years.

But over the past while I've bought two other guitars, both either "hard tail" or blocked too, and I've more recently been irrationally lusting after an expensive Strat with a working trem arm. So instead of spending money there, I thought I'd just bring my Strat's tremolo back into working shape.

The mechanism itself is cleverly simple, with springs on the underside of the instrument that pull the bridge of the guitar back into position after you pivot it on its bridge screws using a lever on the top side.

Normally, when a guitar technician blocks a tremolo, he or she will slide a piece of wood in that prevents the bridge block from moving, as well as tightening up the spring mechanism with extra springs. The guy who did it for Alistair tightened the springs, but instead of using a wood block, put two wood screws in instead. They worked fine, but to remove them I had to disassemble the whole bridge mechanism and pull it right out of the guitar. So I did:

Miraculously, once I reassembled everything, it worked great. That's less a testament to my guitar repair skills than to the always-brilliant simplicity of Leo Fender's guitar design, which was made to be easy to fix, as well as nice to play and look at.

Mine sure needs new frets, though.