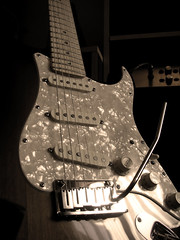 Yesterday I felt great, so I took myself out of the house and hopped the SkyTrain downtown. My mission was to find some additional Wii Remote controllers (no luck), but I also ate a wonderful crêpe for lunch and—of course—visited some music stores.

I've made money as a drummer for 18 years now, so I've been considering finally buying a set of electronic drums, so I can play and record my own drumming, instead of using loops and samples all the time in my podcast tunes, while also avoiding the tremendous racket my acoustic drums produce. (Right now it would be hard to record a drum track while everyone else is asleep, for instance, so I've never done it.)

Electronic drums have improved tremendously in the past few years; still, even virtual kits that cost $1000 or $1500 or $2000 aren't tremendously inspiring. They work, though the sounds are nothing to write home about, and would probably require some twiddling and some better sample sounds on a host computer (running something like the BFD plugin) to be truly effective.

And then I found myself drifting into the guitar department again. I'm not an especially skilled guitarist, but it was my first instrument back in 1978 (holy cow!). We already have five guitars in the house: my old classical, my daughter's mini-steel string acoustic, and the three electrics I've accumulated over the past few years. Yet different ones always appeal to me, and yesterday it was the Fender American Deluxe Stratocaster, with a maple neck and in one of two sunburst finishes, that did it most clearly.

As I've already written on several occasions, the Strat is the most versatile of guitars, but lusting after one seems silly for me. After all, I've owned and played a more proletarian Stratocaster made by Fender's low-cost Squier division for 17 years, and there's nothing wrong with it. Still, there in my hands, played through a Vox AC30 or Fender Twin or Dr. Z amplifier, that American Deluxe sounded and felt fantastic.

So does that cheapie Squier at home, run through my old Fender Princeton amp, by the way. It feels and sounds different, but it's also fantastic in its own way, and a much better bang for the buck. I bought the Squier Strat used in 1990 for about $225; the American Deluxe is close to $1500. And other than the colour, I doubt anyone who isn't a guitar geek could tell them apart.

Guitars can be an addiction, I think. A mild one, and like caffeine not necessarily harmful. But there's no reason any rational player would need more than a few to get any sound he or she needs. No one needs to be Nigel Tufnel of Spinal Tap, with a room full of guitars.

But needs have very little to do with it in the end, do they? I'm not one who checks out fancy cars, or drives around looking at expensive houses, or who wants a boat or a plane or a high-end mountain bike or pair of skis. Let me loose in a guitar department, however, and I could hang out all day. My name is Derek, and I'm a guitar addict.