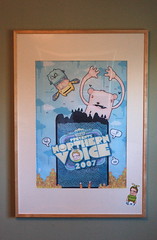 I've never been to the SXSW conference in Austin, though it's been on my "get there eventually" list since the early 1990s. There's a bit of glee, then, in reading Todd Levin's snarkolicious takedown of the whole event (via Kottke).

Twitter is a very simple concept to explain. Imagine there is a tiny invisible girlfriend sitting on your shoulder, constantly whispering in your ear, demanding to know what you're thinking at that precise moment. Now, imagine you decide to answer every instance of her question by sending a text message to her, and all of your friends. That's kind of what Twitter is like, and we're positive it's here to stay!

It's not only snarkolicious, it's accurate. I'm not sure whether Twitter is here to stay, but it's one of those online phenomena (like MySpace, Digg, Facebook, Second Life, Friendster, podcasting, Flickr, del.icio.us, Skype, and even blog comments and tags) that I've held back on to see if it was actually going anywhere. (After giving them a chance to prove their usefulness, I eventually joined the Digg, podcasting, Flickr, Skype, and comments bandwagons, and still avoid the rest.)

My wife tried and loved Twitter, and then burned out on it and has purged it from her online life. She may be a harbinger of what others will do, I don't know. I do know that I'm definitely on the rrroll up the rim to win bandwagon: 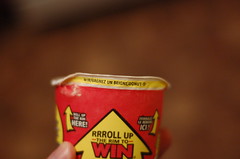 I also framed that lovely gift poster from the Northern Voice folks.